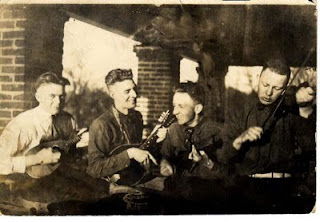 The above photo is of my father and some classmates at Auburn,  sometime around 1917 or so. They were in the ROTC, but by the time they graduated in 1920, WWI was over, so the band new first lieutenants had no war to go to . My father went up North to Holyoke MA, to intern at the Worthington Pump Co.,where he met a lovely young draftswoman (one of the first women  draftsmen, hired to replace the men who had gone off to the war) who later became my mother.My father is the one with what my sister calls the Lyle Lovett hairdo. He was quite blond and handsome, but my mother told me that she preferred dark haired men, and was not impressed when he appeared over her drafting table. He was persistant, thank goodness or I would not be here.
He used to tell us that he had at one time played the mandolin, and the picture is the proof. We all became players o ukuleles, guitars and banjos, but never heard the mandolin master, probably because we never had a mandolin handy. It would be so nice to have a time machine and drop in on those boys of yesteryear. My sister is trying to figure out what kinds of things they would have been playing. There were a lot of good songs in those days: early Irving Berlin or George M. Cohan perhaps? They are obviously having a fine time. The man to the right of Pa is  a man we called Uncle Nelson, his best friend, nicknamed "Swede." As small children,we got to know him when they were both working in New Jersey, before we moved to Atlanta. I just remember that his wife RosaNell had a great jointed, wooden  Felix the Cat doll that I very much hoped she would give me. They never had any children, so I wonder what happened to it. No doubt it will show up on "Antiques Road Show" some day and be worth a fortune.
Went to Blossom Center on Saturday night to see the Joffrey Ballet. They are just a wonder, like feathers with muscles. They did a couple of Balanchine pieces, including a traditional pas de deux from "Swan Lake," but their strength is in the contemporary dance genre, at which they are best. I noticed a peculiar positioning of the feet of the female dancers during a life: they stick their feet out in a flexed position which looks very awkward and a bit dirty. They did that in a couple the ballets, both with different choreographers. It's the opposite of pointed toes and strange.
Went to see "Midnight in Paris" again with a a friend who hadn't seen it. Still great. Also saw "The Help" last week  and wanted less of Skeeter and more of the Black women. Also I found the white Junior Leaguers pretty stereotyped as racists, in a way that was not believable. They were caricatures rather than real people, too over the top. Viola Davis and Octavia Spencer were brilliant. The actress who played the white trash woman was touching, and was also the same actress who played the saintly mother in "Tree of Life." which I would never have known if I hadn't looked it up on IMDB. That's versatility.
I ma re-reading "National Velvet," one of my favorite childhood books and nothing like the movie. It is so beautifully written, almost poetic, and so satisfying to a horse loving child, actually a horse loving child's dream come true. I identified with Velvet who looked nothing like Elizabeth Taylor, but like me,  wan and blond and skinny. The movie got nithing right, and was on e of my first disappointments in a movie adaptation of a book I loved. One of the major goofs was that the horse was called "The Pie" because he was a piebald horse, not the glossy brown one in the movie.  Stupid! My first copy of the  of the book was a cheap edition that had little line drawings by Enid Bagnold's daughter, graceful little drawings of horses. The edition I have now is the 50th anniversary edition, which I bought twenty some years ago, with some very fine watercolor illustrations. Doesn't really need illustrations, though, because it is a wonder of writing. I have heard good things about the book "War Horse," which is also on Broadway now with these great life size horse puppets, and is coming out in December as a film by Steven Spielberg. Sally brought the book over for me to read. It's a children's book, but she loved it, as did a friend who told me about it last winter. When I finish "National Velvet" I have a  stack of things to read. And the New Yorker, looming on a table in a 4 inch stack. Oy veh!
Posted by Guenveur in Kent at 3:59 PM

when did Daddy go out west to do farm work? i thought it was while he was in some sort of war time service???? enjoyed your latest blog.