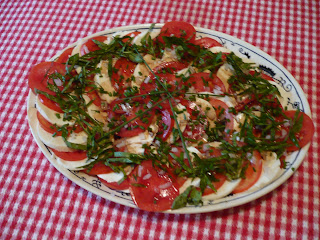 Three beautiful women and the Greek Prince Consort are currently visiting here in Kent. One is my daughter, Emily, and two are my grand daughters, Katina and Elena, and the other one my  is darling  son-in-law Chris. It's been a few years since Chris has been able to come with them., and we are so glad to see him. The girls are grown ups now and we have lively conversations. They spent the weekend in Put-in-Bay, and aren't back yet. It always amazes me that they find Lake Erie interesting, since they've been to much more glamorous spots in Europe. It's all in what you're used to and what is new to you.
The farmers' m,market Saturday was really energized by a drum group called the African Drums, made up mostly by white middle class types who have gotten the rhythm down right. Everyone was smiling and dancing around, although the vendors in their immediate vicinity must have gotten a bit tired of it after a few hours. At one produce stand, the vendor and a customer were discussing Wendell Berry, the poet, and he is a topic you would not hear at the Acme Supermarket produce section, unless someone from the English department happened to be sorting through the lettuce  and talking to him/herself.
I ran into a fellow geezer there (the Acme) the other day, and got stuck listening to a monologue, the kind  that includes things like ..."No, now that I think of it, it was in May...no, I take that back, it was December of 2001...no,  wait, it was 1998, and then we went ..no, it wasn't then it was ..."  For about an hour this went on. I think we need to educate people to recognize that when your listeners's eyes glaze over, or they start reading the product codes on the items in their cart, that's when maybe you should shut the hell up and move on.
Well, he's a nice geezer, really quite sweet but my fake hips can take only so much standing, and my face can only look interested for a shorter amount of time.
The picture is of one of Cris' artistic creations. When he makes a dish, it is always a work of art. This is tomatoes - the kind you can only get in August in Ohio - with mozzarella, basil, garlic,chives and balsamic vinegar. It was part of our favorite summer meal: Ohio corn on the cob, Blue Lake green beans and tomatoes. And then a trip to Stoddard's for frozen custard. That night the special was coffee chocolate chip. All's right with the world.
Posted by Guenveur in Kent at 7:52 PM

I love the fact that you photographed one of Chris' dishes. Wish we could be there to help you enjoy it.