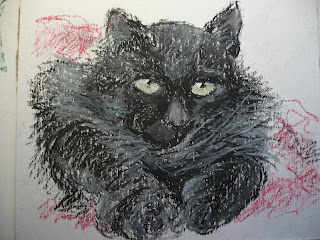 It's been a rough summer for the aged cat who lives in this house. He's had a couple of infections which have responded to antibiotics. John is back from Athens County, which is a relief for all concerned, since I am not the only one who has had to listen to his constant whingeing and snubbing of food.  He has developed a variety of yowls. When I refuse to cater to his food issues, he produces a drawn out unworldly kind of thing. If he were a human child, it would constitute sassy remark.
On the other hand, he is extremely affectionate, nestling up to me on the footrest of my throne. He also like to get into my lap and stare steadily at me, purring all the while. He is also very good at the vet. While John was away, Sally took him several times and was very proud of his good behavior both there and on the ride home, where he curled up on the front seat and slept.
I think he is on his 81/2 life, and it isn't easy for him or anyone else. Right now he is sleeping on the carpet, occasionally muttering a brief meow, a sort of "Don't forget that I'm here," sort of thing. Not likely.
Posted by Guenveur in Kent at 2:55 PM

I just had a kent kapers read fest....hadn't checked it for a few weeks. Entertaining, erudite, and classic Guenveur! Just LOVE the kent kapers. Love.
ML