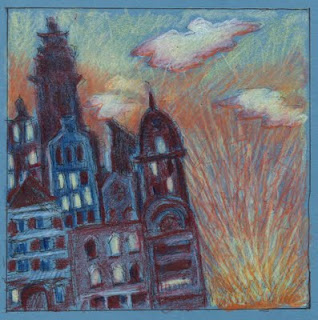 So, I did not watch any of the ceremony going on in NYC. Listened to concerts on WCLV and WQXR commemorating the sad event of ten years ago. In the evening there was a repeat of the remarkable documentary by the two French brothers who came to NYC to do a film about a typical New York City fire department, which ended up as a horrifying documentary about the World Trade Center destruction. It is an amazing film, chilling, especially when you know what is going to happen. Miraculously enough, not one of the firemen form the station was injured or killed, even though they were in the Trade Center when the first building fell. You can hear it as the cameraman and the firemen are in the lobby of the other building. Everything goes black and them dim from the dust. One of the brothers had stayed at the fire station and then when he realizes what happened, he goes off to the WTC, sure that his brother is dead. This is a side story to what is actually happening and they captured everything with their cameras. There is no getting away from the horror of this event, especially since they  covered some things that they can't even show. Watching it brought back the day it happened so vividly that I could feel the same stomach clutching dread that I felt that day. On this Sunday, it appeared that many people greeted the commemoration by waving flags, something that is  peculiarly significant in this country.
One thing that no one mentioned was the resultant destruction of Iraq, which had nothing to do with the WTC destruction. For the 2998 lives lost in the USA from the Saudi terrorists, we have killed tens of thousands of Iraqis, including thousands of children, maimed thousands of innocent civilians, destroyed homes and cities and their culture. We are not memorializing them, nor are we mourning for them. We are waving flags to "celebrate our resiliency." In addition, we have  lost thousands of young American lives and left more thousands with lost limbs and lost minds. We are naming streets and baseball fields for the dead and waving more flags as their hearses pass by on the way to the  local cemetery.
I just finished a book about WWI, describing the horror of those muddy battlefields and men lining up, facing each other and shooting each other across No Man's Land. And twenty years later they went through it again, with bigger guns and bigger bombs and even more people killed.We haven't had that kind of war in this country since 1865, but Europe has, with cities left in rubble, land ripped to pieces, people killed by the  millions, families torn apart, children left parentless and homeless, starving and dying from "collateral damage." We are still in shock from the WTC, the most violent man-made occurrence we have experienced in our lifetime. Are we as "resilient" as the Europeans? I don't think so. But we love that flag, don't we?
Posted by Guenveur in Kent at 7:50 PM