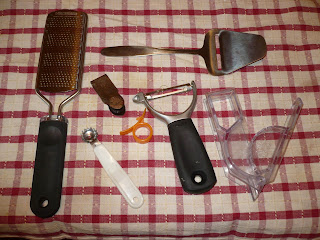 Last year when I  was a guest for dinner at the home of my friend Jane, I was helping her with the dessert. She was making an apple crumble and she was peeling the apples and I was slicing them. She was using an ancient peeler, which seamed to be a bit dull. I told her about my wonderful peeler and that she should get one like it, which would be much easier than using the one she has. "Uh-uh," was her reply. She loves her peelre and has had it for years. She does not want a new peeler, uh-uh. That dull thing was an old friend and worked fine for her.
I realized that I also had pet gadgets, some old, some new which I cannot do without. Some I have had for fifty years or so, like some knives, a strainer, and a strawberry huller. I broke my glass lemon juicer a few years ago and was horrified to find that they don't make them any more. I found one in an antique shop and it was not expensive but I guard it with care.
The gadgets above are things I have to have.  Only a couple of them are old, because the others hadn't been invented yet when I first stocked my kitchen. On the left is a zester, a gift from Polly,one of three I have which I use to grate nutmeg, Parmesan cheese and lemons or oranges. For some reason the light makes it look rusty, but it's not. Next to it is the strawberry huller , which is ancient and is only used when strawberries are ripe in Ohio. Below that is a little gadget I got up in Amish country for removing that leaf stem on tomatoes. I use it mostly in the summer, when Ohio tomatoes (our state veg or fruit depending on whom you believe) are ripe. The little orange thing is also from Amish country (and we think they have such a hard life!) used to strip orange peels and I cannot do without it. They don't last forever, so I usually buy a bunch of them. I only use that in the winter months when there are good oranges available. Then there's my magic peeler. First time I saw one of these was in Germany in my daughter's kitchen. I can't remember if I bought this over there or found it here, but I can't use the other kind. The next plastic object is a lemon slice squeezer. I've had it forever and I don't know where I got it, but it is indispensable when you don't want to use a whole lemon and you  only need a tablespoon or two of lemon juice. It's old. Hovering over all is a cheese slicer. My late friend Harriet claims it was invented by a Norwegian (which Harriet was one of) and you can sere its outline on this one brand of cheese. It makes really nice slices of cheddar or Swiss to go on a cracker or to put between two slices of bread for grilled cheese sandwiches. It's not very old, and so much better than those crummy wire cutters which break right when you're in the mood for a grilled cheese sandwich.
I still have my 60 year old Revereware pans, only I don't shine the bottoms any more, but they're not gadgets, but nice familiar things I like very much.
Posted by Guenveur in Kent at 4:45 PM

My favorite things are as follows: my French non-stick crepe pan, sharp German knives, solid as a rock garlic press, and, of course, that little Amish tomato stem remover, tool!