John knows that I have missed my old car rambles now that I am a pedestrian/passenger. The snow melted and the weather turned sunny and pleasant, so we took off the other morning to visit old haunts. We headed for Carrollton, some fifty miles or so south of here. Carrollton has became a fracking center, a regular boom town, according to the papers, and I wanted to see it before it disappeared into the void, perhaps literally. We went the back way, which takes you over the hills and far away, with plenty of long views over lovely hills. We encountered no fracking sites, although we did see a lot of dump trucks all the same make, trundling down the roads south of Carrollton. 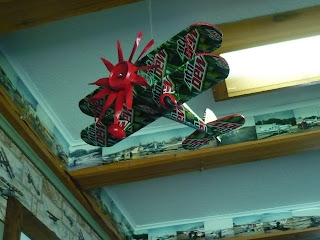 One of our goals was to eat lunch at the airport diner, a place of mom's home cookin' and pilot types. The only other people there this time, however, were a quartet of traveling salespeople who were discussing mileage points at hotels and airlines rather than wind vectors and narrow escapes in thunderstorms. Since we had some mince pie at home, we passed up the home made pie for which this diner is famous. The room is decorated with model planes, airplane wall paper, and there used to be a propeller clock which seems to be gone now. 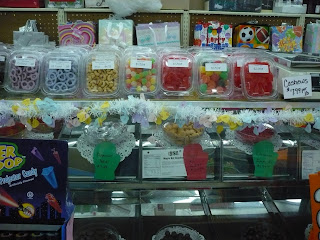 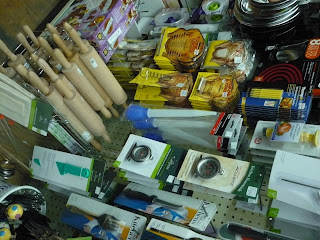 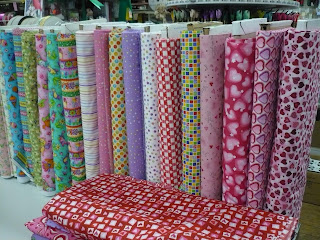 After lunch we went into Carrollton because I wanted to see the last honest to goodness dime store anywhere in this part of Ohio. It's a Ben Franklin. It has wooden floors and the clerks wear smocks. It has a candy counter. It has a huge fabric section, along with patterns, spools of thread, notions, and embroidery floss. It has rows of kitchen gadgets (probably all made in China, and one whole section of tea towels and dish cloths.  It has toys, books, crayons and paste pots. One of the clerks told me that there are a lot of quilters in town.
After that, we headed down to Harrison County (where there's a monument to Clark Gable who lived there as a boy) to get to the Moravian Trail, which climbs up the ridge over Tappan Lake. This area is where we saw whole convoys of dumptrucks. This used to be a coal mining area, so the roads are built for heavy traffic, but those strip mines have long been played out. This oil company from Oklahoma has been all over this part of the state, buying leases for drilling into the Utica Shale 2000 feet below. The area is also very poor, so  the money is tempting . There's a huge controversy brewing because of the consequences of careless drilling, the most worrisome of which is the pollution of the aquifers, to say nothing of creating instability underground. There have been 11 or so earthquakes over near Youngstown, one of which we felt here in Kent.
However, up in the hills it's just as beautiful in winter as it is in the spring, even though everything is brown and tan with bare trees. You can see for miles. The general store in Deersville is closed for renovation, whatever that means for a place that sells ice cream, beef jerky waders, bullets and bait. I hope they don't fancy it up too much.
We stopped in New Philadelphia, a really nice little city with a very fine non-Starbucks coffee shop for cappuccino, tea and scones. It was a very nice trip and I appreciated the chance to go back to some of my favorite places again. I think we'll go back in the spring, if they haven't fracked the whole place to bits.
Posted by Guenveur in Kent at 3:51 PM