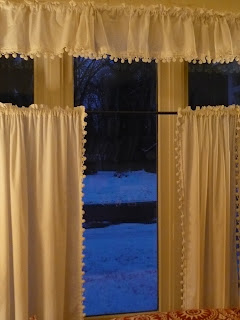 This time of year there's a certain time of day when the world outside my window turns blue, especially when there is snows  on   the  ground. It's a lovely shade of blue and I'm sure there's a word for it  - not so dark as cobalt but of the same hue. We've had snow showers off and on all day, but there's only a powdery coating on the lawn, a harbinger of things to come for the next four months or so. So I'll be seeing that blue for some time. Sacre bleu!
Polly left on New Year's eve. Her time here went so fast. As we did last year when she was home for Christmas, we went to a lot of movies, since this is the time when the producers pour out their Oscar contenders. While she was here we saw:  "Ides of March", "War Horse," and "My Week With Marilyn". She and John went to see "The Girl With the Dragon Tattoo." I was disappointed in the beginning of "War Horse," since Steven Spielberg couldn't resist cuteness, having a goddam goose chasing a landlord for laughs, making the father, who in the book was a mean, violent farmer into a pitiable drunk, involving the whole village in watching the young man plow up a stony field with the star, who was part thoroughbred (illustrating a sort of "Rocky" moment). It was a dumbing down of the book, since Hollywood directors  underestimate the intelligence of children----except for Scorsese who did such a beautiful job with "Hugo." For those who haven't seen "Hugo," it has come and gone so fast you might have to wait for the DVD, which is a shame because it is a celebration of movies, the kind that are most enjoyable in a theater. (Sally gave me a copy of the book for Christmas and it's a wonderful addition to my illustrated book collection). I've never been much of a fan of Marilyn Monroe, except for "Some Like It Hot." I always felt sorry for her as an exploited person. Michelle Williams, who plays her in the above movie, is just terrific and I am sure will be nominated for an Oscar and any other film awards going this year. "Ides of March" is a very good film about how a political idealist becomes a political cynic. Ryan Gosling is mighty fine; I had not seen him before and I hope to see him again in a film worthy of his talent.
We did the usual Boar's Head ritual at the magnificent cathedral in Cleveland. This year there were TWO donkeys, one a miniature. This year the donkey wasn't forced to climb the steps, since last year it had balked and caused Joseph a deal of trouble. I heard that the miniature donkey was there to keep the large on company. There were two pygmy goats with the shepherds, one of which kept bleating all the way to the end of the sanctuary where the holy infant was trying to sleep and all. After the pageant they serve ham, mince pie and plum pudding with rum sauce (it's an Episcopalian venue). We partook , even though we were going to No.l Pho for the usual post Boar's Head meal. Came home, watched a little TV and went to bed while it was still 2011.
Posted by Guenveur in Kent at 8:45 PM

I love that special shade of blue as well. We haven't had enough snow here to appreciate that just yet. As Cynthia said, it appears my fave light is 'the gloaming'...