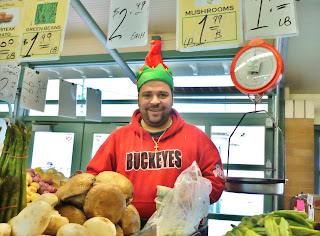 Christmas Eve eve, we went up to the West Side Market, a sort of family tradition of late. It was festive, as it always is during the holiday season. I was happy to see that the Greek bakery lady was back. The last few times I had been there she was not at her usual place behind the counter. I found out that her father, the baker, had had a stroke and she and her husband had been taking care of him. Now she is both baking and selling and she has not mastered all of his recipes, especially the little tortes I love, but will soon be up to speed. The vendors were jolly, some wearing silly Santa hats. We had lunch at Min Anh, the Vietnamese restaurant on the west side. Delicious food there, as usual. For this reason we got to the market a little later, which meant that some of the vendors were cutting prices and we bought a lot of stuff which has been used for great dinners.
Christmas Eve, Polly decided to make pierogis, using an online recipe. They were excellent, but she says that she will never so that again - too  labor  intensive. We ate a lot, gave some away to a friend who dropped by with a nice beef roast (That's the kind of friend to have!!), and still had some left to freeze for later.  Emily had sent a box of German goodies which we are trying not to gobble down all at once, things like Mozart balls and Lebkuchen, not for the calorie conscious.
Christmas morning started with John's pancake breakfast, which kept us full enough until the late afternoon and dinner. Christmas dinner was a sumptuous feast, with duck prepared by John with Polly's homemade marmalade  and two great side dishes (armored turnips and Brussels spouts) and a mince pie by the chef d'jour Polly. She has spent a lot of time in the kitchen during her visit home, and her way with food is  much appreciated. I did stir myself enough to make some plain old mashed potatoes and Sally did the clean up.
Today the Kinder are taking a hike in the  Cuyahoga Valley National Park and then we are going to the movies with dinner to follow at the Chinese restaurant  next to the theater. And after that, we'll come home and finish the mince pie. 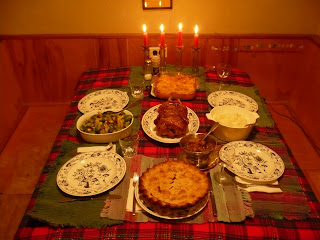 Posted by Guenveur in Kent at 1:15 PM