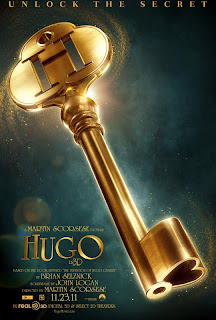 Yesterday Sally and I went to see "Hugo."  It is based on the Caldecott award winning graphic novel and it is just a splendid movie, directed by Martin Scorsese, and it is an homage to the art of movie making. There is a version in 3-D which I did  not want to see, because I never get the 3-D sensation and I can't think of any reason that anyone should need to see it in 3-D. It is beautifully cast and filmed in plain old 2-D. Ben Kingsley, whom I didn't recognize at  first plays Papa Georges who turns out to be someone you may never have heard of unless you're a film nut like me. Sacha Baron Cohen plays a frustrated station guard in a fine and funny Peter Sellers kind of way without a trace of Borat.
If you have a brighter than average 8 or 9 year old  kid relative or friend who has not had his/her wits dulled by the usual kid movie crap, I think the movie would be even more enjoyable than already is. It has not been very heavily promoted, so people are taking their children to see junk like the chipmunk movie, which is a shame. " Hugo" is set in the 30s and there's not one anachronistic use of language in it, which is refreshing, too.
Lovely flick. Don't miss it.
Posted by Guenveur in Kent at 8:29 PM