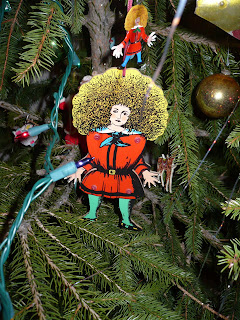 The siblings put the tree up the other day and trimmed it mightily. Polly is the usual arbiter of what goes on and what does NOT go on. This used to cause the annual putting up the tree fight. However, now everyone being in their fifties, or close to it, the trimming went smoothly. Polly had the idea to use some of my German Jumping Jacks, which are a great addition.
I love these things and have a selection  of them: Mozart from Salzburg, a lederhosen wearing lad from Rothenburg and a jester from Oberammergau, the home of the Passion Play. Perhaps there was a jester somewhere during the Passion, but I do not know exactly how that role would fit in with the general scheme of things. 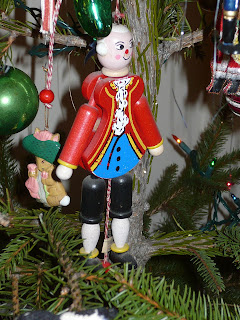 The Slovenly Peter is John's but I have hung it up with my others. Slovenly Peter was the creation of Dr. (of what I do not know) Heinrich Hoffman, a series of cautionary tales for children, in which infantile miscreants suffered all sorts of gruesome chastisements: getting their fingers cut off, being drowned in an ink well, exploding from over eating, and the like. My sister and I absolutely loved this book when we were very young children. At some point the libraries took it off the shelves as being too intense for delicate children, and I didn't see it for years. My friend Bob Morrow, a former art teacher of mine, had an original copy of it he had had saved from his childhood.  I was able to find a copy of it from Blackwell's in Oxford. Anyway, there he is, along with a miniature Peter which I bought at the Chriskindlmarkt in Akron a couple of years ago when they had brought in a group of jolly Germans to brighten up the holiday season here in Northeastern Ohio.
Before I found my Slovenly Peter book, feeling that my children would benefit from this sort of thing and thinking they would find it as hilarious as my sister and I had, I got them a couple of similar books by Hillaire Beloc, titled "Cautionary Tales for Bad Children." Alas, they did not find it funny, but were rather terrified by the fates of some of the kiddos - burning up in a fire (playing with matches and being eaten by a lion (disobeying the warning signs at the zoo.) I think they're still dealing with this in therapy. We were much hardier in the old says.
The tree looks great. 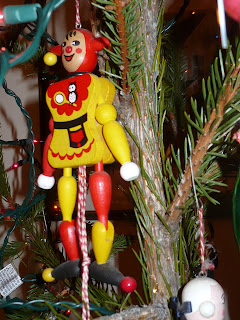 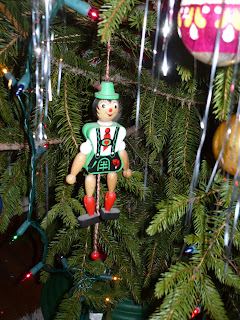 Posted by Guenveur in Kent at 5:53 PM

Love the jumping jacks on there - great idea! Your granddaughters grew up with Slovenly Peter (called "Struwwell Peter" here in the land of his origin) and found the book so traumatizing that I had to hide it for years...