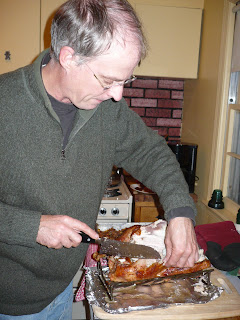 I have been remiss in keeping up with my blog of late. No particular reason.  Thanksgiving was busy, what with  visiting relatives from far away, namely Polly and Emily. Polly spent a lot of time in the kitchen, much to our delight, since she is an excellent cook. Emily made her Gorgonzola pasta which we all love. A good time was had by all.
The girls and I went down to Salem to tour the Charles Burchfield house. Burchfield is one of my favorite artists, one of these great Ohio guys from the 30s and 40s. He did theses magical expressionist watercolor landscapes.The neat thing about the house is that copies of his paintings are positioned so that you can look out the windows and see what he saw, since not much has changed in the neighborhood over the past 100 years - a rare thing, indeed. Much of his work is in Buffalo, NY, since that's where he ended up. The Cleveland Museum of Art has some of this paintings also. He was a contemporary of Clyde Singer.
Went to see "The Descendants." which we all enjoyed. It's an Alexander Payne ("Election,""Sideways") flick set in Hawaii. Never liked Hawaiian music, but just loved it in this movie. And then there's George Clooney, who just gets better and better with every  movie he makes.  They need to give the guy an Oscar.
Of course, there was the loss of Dupree which was tempered somewhat by having everyone home. Then, of course, the girls left and the house was really empty. We keep thinking Dupree is still around. I mean after 17 years,m he was part of the furniture, only warmer, fuzzier and cuter. We really miss him.
Saturday's opera was "Rodalinda, a Handel work with much tessitura, a lot of it by two counter tenors. They had beautiful voices, except when the had to do their recitatives in falsetto, which came across like an old Sid Cesar skit, the one where he played a silent film star whose career was ruined by the arrival of sound. The one counter tenor even looked like Sid Cesar. When they were interviewed during intermission, they both had very deep male speaking voices. I'm not sure why Handel used that vocal range for those roles, since they both were regular guys, one of whom was married to the leading woman (Renee Fleming).So  she's singing a duet with a guy who sounds like a woman. Oh, well. It's only the second opera by Handel that I've heard and it was a good lead up to a Messiah sing on Sunday which Sally and I attended up in Hiram. I haven't sung a "Messiah" for about fifty years, and even though I can whistle just about every chorus and a few of the arias, trying to follow it along was not easy and I got lost a couple of times. It didn't help that some tone deaf guy kept walking up behind me and throwing me off even more than I already was wandering about in the mass of notes. But it was great fun and the soloists were mostly great. That night it was up to the campus to hear the Kent Chorus do their Christmas program, which included a Missa Brevis by Haydn. I don't know why it seems as if every weekend I am engulfed in music. Coming up this Saturday is the Met "Faust," which looks good even though they are setting it in the 30s. But the misc will still be great. I think.
So, I guess I have been busy. Really enjoyed having all four of my grown children here for two weeks. Polly will be coming home again for Christmas, hurrah. 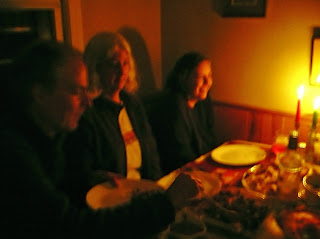 Posted by Guenveur in Kent at 8:37 PM