Holmes County On a Roll And a Diverfsion 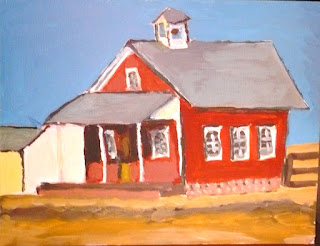 As you can see I have been painting a lot. Maybe I’ll take a rest, but I am enjoying it immensely. Here are two more that I have cranked out in the last week. There are numerous little schoolhouses in their communities where Amish folks live. Sometimes they are devoted to a particular sect. Some of the Amish children attend regular public schools, too. It used to be that most children went to school through the eighth grade, and in the stricter sects that is still the case.
The things that  look like little witches are wheat sheaves. You can see them lined up in the fields in late summer, and it's a lovely sight. (and a lot of hard work for the women.)

Making these paintings  has almost  become an addiction. Since I have all these photos there seems to be no end to it. But I shall try to post something different soon.


Maybe about gun control. God knows somebody has to mention it. What has happened that no one is talking about it in the wake of the horror? Obviously the guy has lost his mind, but has access to the kinds of weapons used in war. Columbine, Virginia Tech, the psycho army psychologist (!!!???) – dozens of people dead and critically wounded for no reason except that guns are so easy to buy and we live in a gun-loving vulture which spends more on fire power than on mental health services and research.


I hate to write about this in the midst of the pictures of the pacifist Amish community, but in this election year when the two candidates for president apparently don’t want to or are afraid to piss off the NRA, I feel the need to rant.


I guess that’s why I feel so drawn to the Amish. They don’t use Uzis when deer hunting. 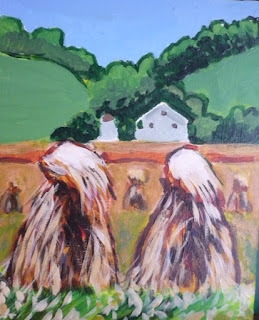 Posted by Guenveur in Kent at 4:08 PM

Please don't stop these. I love them.

I concur with Nancy - these are TERRIFIC and you're really improved with the Münter-ism!