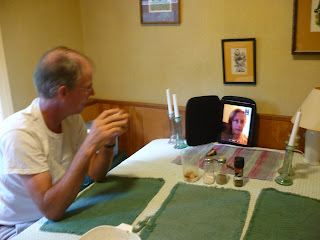 This will probably wear off after a while, but I find Facetime quite fun. I accidentally called Emily this morning. I had noticed that there was a little red number on the Facetime icon on my IPad desktop. I remembered that Emily had told me she tried to Facetime me from Fauborg, so I wanted to see if she had been able to leave a message. I kept clicking on her  name in red on the contact list and hearing the phone ring, but thought she was calling me, even though it was not my ring. The message at the bottom of the screen only had an “End call” notice. After a while I realized that I was calling her, and that she was not available, so I hit the end call thing. A few minutes later my Facetime thing rang and I answered it and Emily was wondering why I had called her. I explained and the, as I brushed an English muffin crumb off the screen, she disappeared. I finally got her back, once I figured out how to actually on purpose make a call.


I had been about to fix breakfast, so when John came down to talk with her I went out o the kitchen. John decided that she should join us for breakfast, which she did, although we could only show her the delicious hash brown potatoes I made. At her hone, behind her in the kitchen, Chris was preparing dinner, where we could see him chopping things. He was making vegetarian goulash, with tofu. Emily said it was going to be delicious, but we didn’t get to see it finished. We chatted during breakfast, as you can see.


We’ve invited her for Thanksgiving dinner, too.


So I am having fun with this gadget, but I must steel myself to leave it and do something useful now and again.
Posted by Guenveur in Kent at 4:04 PM

I love my iPad. We had a marvelous time with it doing Facetime in Copenhagen with Sam, age 6, and showing him the city and explaining that we were thinking about dinner while he had just finished breakfast! It is a wonderful thing.

That was so fun. Let's do it again. Very cool about Face Timing with your grandson, Nancy! I did the same while in Copenhagen with a friend. There's so much more wi-fi there than there is here in Germany.