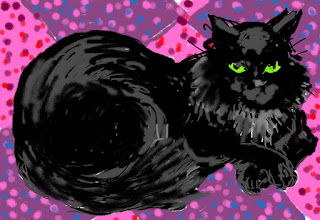 Well, I have to get one more post in before the end of September, which is today. The IPad is raking up too much time. Now I have a near drawing program which I use to waste time. I tried several, and settled on this one, which I think was designed by a 12 year old kid. I had some questions about it, and I had barely emailed a query than the answer zoomed into my inbox. The only problem is that it doesn’t have a zoom function, which makes it hard to work on fine detail. Otherwise, it has a lot of colors and brushes.   So did the others, but this is the easiest. Working so much on the Pad has caused me to try to sweep my fingers on this laptop, or try to pinch things to enlarge them, with no results except to smear the screen. Anyway, here are a couple of attempts at digital paintings, one of which is the late, great, still missed Dupree.


“Arbitrage.” Of which you may not have heard. I happened to see an interview with Richard Gere on the TV. He plays one of those hedge fun guys who helped crash the economy and gets away with it. Well written, well acted and not deserving to be missed.


“The Master,” Paul Thomas Anderson’s latest, and another disappointment as was “There Will Be Blood.”  It’s doing well at the box office, and I am glad that I saw it. The hype is all about Phillip Seymour Hoffman, who is good, but Joaquin Phoenix is the real star, doing in incredible turn as a mentally wounded WWII vet. Everything about his performance is so real that it seems as if the director went to a VA hospital and asked for a recent casualty of war veteran to play the part.   His face, his body language is all twisted in mental and physical pain.  I had to wonder how he managed to do that without its affecting him. The problem with the film is that it plays as if shot 100 hours and edited it down to 2.5 hours and lost some cohesiveness. He stated out with a splash with “Boogie Nights,” which was dark, and then “Magnolia,” which was darker, and then “There will be Blood.” Which was dark and violent and now this one, in which almost everyone in it is a nut case and it’s hard to care about anyone. No one changes, nothing gets resolved. It’s the kind of movie that, if you go in feeling good, you come out depressed and anxious, and if you go  in feeling not too good, you’ll come out feeling much worse. And I came out feeling terribly worried about Joaquin Phoenix. And noticing that Phillip Seymour Hoffma still has those grimy, black rimmed fingernails. What’s wrong with this man? (I can't get the l ink thing to work, so I wrote about his fingernails in January, 20009,so  you can check it out.)
Oh, I got the link to work!

Posted by Guenveur in Kent at 7:19 PM