I now have KNOWLEDGE right in my hands. No need to trudge across the room to access my Desk top to find the name of the actor who just waked across the screen. I reach down for the IPad, click into IMDB and there is the name my ancient brain hasan't been able to extract from the huge data base of trivia which used to lodge there. Who won the Oscar for best actress in 1963? Google knows, and so do I, in the wink of an eyelash. Handy for those nasty Friday and Saturday cross word puzzles, especially when it comes to sports (although John is handy for that) or rap or rock music titles and names. Is that cheating: Don't know, don't care.
I am also neglecting the real painting for the virtual stuff. It's like finger paining and there are all sorts of clever variations one can do with a little click here and a little click there. I am not by any means skilled at this and may never be, but it is fun. I still have a couple of Amish scenes to do with real paint, but I seem to have found it easier to just fool around with the digital, virtual junk painting at this point.
"The Master still looms large as a topic of discussion. John discovered a blogger with an interpretation that makes a lot sense. His analogy of the relationship between the two main characters equates it to that between a dog and his master, with Phoenix's character the dog, of course, and Hoffman's as - ta ta - the master. It certainly works well on many levels. If it weren't such a difficult film to watch, I would see it again and find infinite parallels. As much as I did not like it, I have certainly done a lot of thinking about it. It's that kind of film.
Here's a digital image made while watching "Dancing With the Stars,' a guilty pleasure. How 'bout that Apollo One dude? 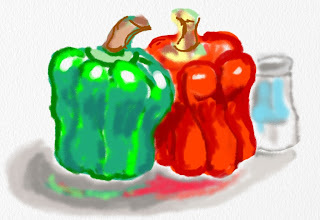 Oh no, I hope we haven't destroyed your real life painting skills by getting you this iPad! But I love what you're doing with it, anyway!