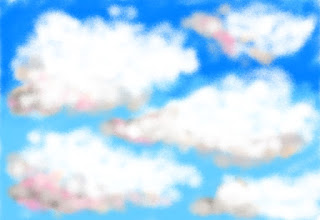 The skies are so beautiful this time of year. Since I’m not the one driving, I can feast my eyes on them instead of watching the road. I find it interesting being a passenger anyway, because I am seeing things I never noticed before: houses, gardens, fields, landscapes I’ve passed probably thousands of times and never really saw. It’s a new perspective from a different side of the seat.
A friend called the other day to tell me she had booked a trip to Amish country on a tour bus and invited me to be her guest. The problem is that we will not be exploring the back roads I love, but will have to stick to the main ones. I will enjoy it, because she is a good friend, and good company, of course, but it won’t be the same. However, John has promised a ramble, too, and we will hit the offbeat areas.
Next week, there is the Apple Butter Festival up in , to which I took the kids when they were young, where one can watch the Amish stir giant copper kettles of apples into apple butter. It’s held in the , up on a hill from which you can see miles of autumn colors. It smells good, too. That same day, though, is also the first of the Met Opera HD broadcasts, so I will not be smelling boiling apples. The village consists of historic homes and buildings which have been moved from around the county and restored. We always loved to go into the one room school house, especially to see one of the desks on which a child named Emily had carved her name ---or maybe a little boy who liked her carved it. There’s a general store, which used to sell penny candy, a milliner’s shop ands a number of wonderful houses. We quit going when it got too popular and overcrowded, but we all have fond memories of those days. They also used to have a steam machine festival, with sawmills, tractors, and steam rollers. The Amish continued to use steam powered machines and maybe still do. Since the village is on a hill, you could see it from miles away from the black smoke rising into the sky. I think they quit doing it because of the pollution. It was fun to hitch a ride on a steam tractor with a whistle you could barely hear above the clanking of the mechanical parts of the old iron contraptions.
We drove through the golden tunnel yesterday but it’s not quite golden yet. I think this week it should peak. It’s the highlight of the fall for me. Here’s an IPad drawing of it, more or less. 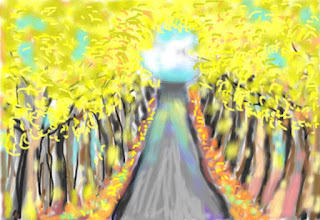 Posted by Guenveur in Kent at 3:03 PM

I love what you're doing with that iPad painting program. Ah, Ohio + October, simply heavenly!