Fall and Other Stuff 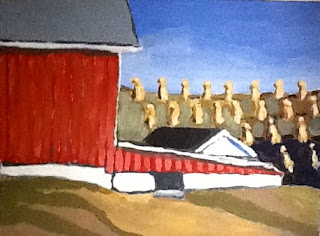 It’s been a busy time around here, mostly because of the beautiful autumn season we’re having. The colors are brilliant; the weather is sunny with blue skies against which the golds, oranges and reds are vivid. Sunday we drove through back roads to for the annual Algonquin Mill festival, a sort of pioneer celebration, with women spinning and weaving and men using steam powered machines to saw and plane tree trunks into boards and shingles. There was a horse walking in circles, attached to a grinder turning sorghum stalks into syrup. Years ago, I went down there and there was a very old man who made stone butterflies, beautiful things he set with gemstones. He used blue and gray agate which he had split into thin pieces for the wings. Butterflies from stone! Of course he wasn’t there this time; he’d be over a hundred by now. I had rather hoped he’d have a son or daughter who’d continued his craft.


Yesterday I went on one of those geezer bus trips, having been invited as a guest by a friend. I was not enthusiastic about going, but it turned out to be just fine. It was a trip down to , the site of my recent paintings. The great thing about it was that we went on back roads, my back roads, including what I thought was only my secret way to the Doughty Valley. It was a gorgeous day. We made a number of stops for shopping, which is mot my favorite thing to do, but it was a pleasant group of geezers and some even younger folks.  We had a good lunch in a fake chalet with a visit to a cheese place across the road where everyone except me bought tons of local Swiss. We then stopped at an Amish apple orchard on top of a hill with a wonderful and bucolic view of the countryside. Our last stop was a winery with really bad wine, wine of which we were given a tasting. I only tried two and they were so bad that I didn’t bother to try any more. Most of the travelers were so loaded down with purchases that it was not easy for then to get off the bus unaided by the time we were back to .


Our first stop had been the legendary Lehman’s Hardware store in Kidron. It had been a nice hardware store catering to the non-electric, non-gas-using Amish. When the scare about the millennium, ending the world as we know it, Lehman’s made a killing, selling wood stoves, lanterns, wash tubs, brooms, clotheslines,  and other survival kinds of things to city folk, advertising nation wide.  Now instead of a neat store carrying things the Amish need, it has become this enormous spread of spaces carrying things like Tilley hats, hard by the Amish straw toppers, CDs, jams and jellies, and you name it. It’s a tourist destination kind of place. They still have the old things, but they are hard to find. Now there are $8000 mega stoves (run with wood or gas/electricity), like the gas you see in . Hardly the sort of thing the average Amish farmer could ever afford. I find it depressing, but it was a popular stop and some of the folks didn’t want to leave it.


Today I introduced yet another citizen of this area to the wonderful West Side Market in . I am amazed at how many people who have lived around here for years have not gotten into the West Side Market habit. It’s easy to get to, and has just celebrated its 100th anniversary. My Greek bakery lady told me that they had a big celebration a coupled of weeks ago, involving a parade of the vendors (sounds like something Sousa should have written) and a big party. My friend went crazy, as most people do on their first visit, buying all manner of things just because they were there. I love that place. I hadn’t been there in almost a year and there are new vendors since my last trip. The old guard is mostly gone, with all sorts of new ethnic goodies available. The sauerkraut folks have been replaced by the Asian hot sauce lady’ the German butcher by the middle astern deli person. It’s all beautifully arranged as you walk in, with so much color and variety one becomes a bit overwhelmed. I brought home some pepperoni bread, a baguette, bananas, Hungarian sausage and spiinach, not the baby kind, but the grown up wrinkly kind which is currently bubbling away on the stove for Portuguese soup.


Apropos of nothing, I read recently that kudzu had reached .  I spent my childhood in kudzu land. I didn’t know what it was called but it took over vacant lots and woods in . There was a vacant lot in downtown which we would beg our father to drive by. The vine had covered a tall tree stump in a way that looked like a dinosaur, the one you saw on the Sinclair gasoline sign – a brontosaurus, big and green. It fascinated and scared me a bit. One of my favorite comic strips was “Alley Oop,” and he rode a brontosaurus, which nay be wherew the creationists got the idea. 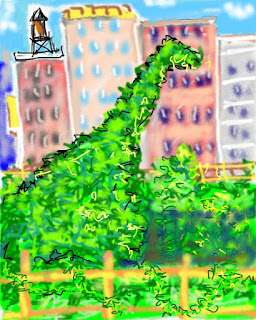 Posted by Guenveur in Kent at 6:23 PM

Love the first illustration. And the wine tasting brought to mind this adventure of ours, some years back: http://nancynearphiladelphia.blogspot.com/2006/07/adventures-in-wineries.html