Last week I watched one of my favorite movies on my IPad – “A Trip to Bountiful.” written by the terrific Horton Foot. I have seen it a number of times and it always gets me. My sister once pointed out that Geraldine Page does this thing with her mouth that is annoying, and she’s right, but it’s such a fine performance that I don’t mind. The thing is, the character reminds me of my mother-in-law, the late Ernestine Wagner Burnell. She grew up in a tiny town in Southern Ohio, on the . It was called . (Was it named for a French hooker perhaps? Oh, I guess that would have made it .)  After she married, she moved to , , but was always home for her.  My husband said that every holiday, they would go “over home,”  as she put it. That’s where her family and her church were.


I wrote once about a Thanksgiving I spent there with her and her sisters, Beulah, Frieda, and Genevieve and their husbands. Genevieve’s husband owned the general store, which contained the Post Office. Frieda’s daughters owned a flower shop in a neighboring village. Beulah married into a coal nine owning family in and lived near . They were not too keen on men, the main reason being that their father, who had been the superintendent of schools, had left their mother to marry his secretary and start a whole new family back in 1914. In that small community, in those days, this was a scandal that marked them all for life. His name was never mentioned, nor was his new family acknowledged by the sisters. Their mother, Lily Wolfe Wagner, became a martyr, living her life out in the village, occasionally moving in with a daughter. She always had a lugubrious expression and died forty years after the main tragedy of her life.


I guess had been a thriving little community when Ernestine was growing up, but when I knew it, Uncle Herb’s store and the church (where the piano sounded as if it had barely survived the 1913 flood) were pretty much all that was around, except for the houses where people still lived. There was a funeral parlor and a community hall for the town government met, and where get togethers could take place. There had been a chicken processing plant right in the village center, but it had recently closed. Dial phones were a recent luxury in the early 50s as were indoor toilet facilities. But, to Ernestine and her sisters it was “over home.” She is buried there along with a host of the Wagners, and her husband, who grew up in nearby . Three of the sisters had sons, all of whom died before the age of 40, a fact that I find unbearably sad, especially since one of them was my husband. They didn’t have much use for men, but they adored their sons.


“A Trip to ” reminds me of Ernestine because the character looks so much like her. She was a large, but not fat, woman with prematurely white hair which she had “dine” every week. She was the prettiest of the sisters, with an olive complexion and clear gray eyes.. I don’t remember her being very religious, because her church was “over home,” and not in . She was big in the DAR and the Colonial Dames and the Democratic Party. One highlight was meeting JFK when he came to campaign in . She had been a secretary before her marriage and used her office skills during political campaigns. She never quit being a country girl from an village, though. was in her spirit, and even after all those years in , that’s where she wanted to be, in that small cemetery among her family.


Some twenty years ago, I took a trip down to Southern Ohio and was one of my stops. Just as in the movie, it was all but abandoned. Uncle Herb’s store was gone. The community hall had broken windows with tattered curtains blowing in the breeze. There was almost nothing there but a few old houses. I went to the cemetery, which is still well kept, by whom I do not know, and there were even   a few newer graves. The largest monument there bears the Wagner name, a large white stone the family bought for the bereft Lily Wagner. Ernestine is nearby; along with her husband John Burnell, Sr. It is all very quiet and lonely. And Ernestine is home.
Below is the latest Holmes County painting. Still no word from the library about an exhibit. 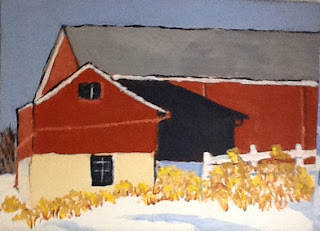 Posted by Guenveur in Kent at 4:04 PM