Some years ago I attended a week-end storytelling workshop which featured a storyteller, Mary Hamilton, I had studied with down in a few years earlier. One of the sessions which she ran involved taking nursery rhymes and turning them into stories. The participants in this session were probably in their twenties and thirties, most of them school teachers.


When she asked them to recall a few old nursery rhymes, she was met with a series of blank stares. “You mean, like “The Three Little Pigs?” asked one. When reminded that that was already a story, or nursery tale, the student looked confused.


Finally someone spoke up and said that they really hadn’t learned those kinds of things when they were little, nor had they “studied” them in teacher training. Mary looked at me, trying not to roll her eyes. She asked me to name a few, which I did, the common ones you’d think everyone would know: Little Bo-Peep, Old Mother Hubbard, Little Boy Blue, Jack Sprat Could Eat No Fat, Baa, Baa Black Sheep. I might as well have been speaking Swahili.


Since no one knew anything about nursery rhymes that made that session pretty much a bust, and Mary changed it to another theme. Afterwards we discussed this. How had so many people missed what was a rather key part of childhood? The workshop was in a university town, the people in the class had degrees in education, and they all spoke English. I still don’t know if they were unique, or if Mother Goose has been cooked. These rhymes are part of our cultural literacy alluded to in literature, the various media, even in advertising and general pop culture. They are historical, symbolic and mythic.


I have a number of Mother Goose books, one of which is fairly recent (the 80s, called “Lavender’s Blue”) and one by Chas. Addams, featuring his creepy characters and a macabre take on the story line. Of course, that’s my children’s favorite. I find it interesting that, even in the newer ones, everyone is dressed in old fashioned clothing, mainly from the early 1800s.


I also have the Opie’s “Annotated Mother Goose,” which gives the historical significance of the rhymes and what they actually represent. Do they reach that sort of thing in English departments these days? Probably not. But the language alone is worth the trip through some of the quaint verses.


Oh, wait - we speak text now. And reciting to a kid such lines as “Ride a cock horse to Bannbury Cross” would probably get you arrested for obscenity these days. And if you talked about Jack Horner putting his thumb in a Christmas pie, you might be thought to encourage rude food habits. To say nothing of Peter putting his wife in a pumpkin shell. Or the old woman who lived in a shoe beating her children and putting them to bad. Or Georgie Porgie chasing the girls and making them cry. Well, these  things are totally politically incorrect. But wonderful.
I have to believe that somewhere parents are reading these to their children. 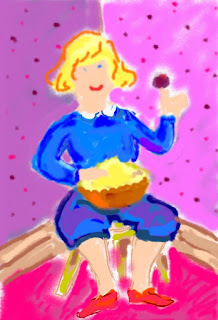 Posted by Guenveur in Kent at 5:34 PM

As you know, I read such things to your raised-in-Europe grandchildren, to give them a sense of my own culture, as well as to relive the delight I found in nursery rhymes in my early years. I think most people these days are just plopping their tots in front of an iPad, sadly. I weep for the world.