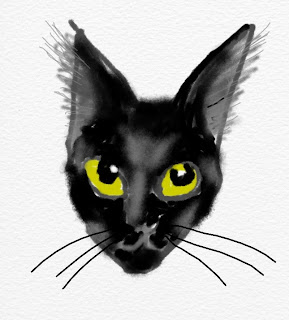 It’s been just about a year ago that we lost 17 year old Dupree, the beautiful long haired black cat which John had found as a kitten in a park in southeastern Ohio. He has been sorely missed. Last Thursday, John brought home a tiny black kitten as a new member of the household. He is part Siamese, relentlessly active, tearing about the house, pouncing on newspapers and shredding them, jumping on tables and laps, rushing up and down the stairs and skittering through the kitchen. It’s like having a pet roach, without the disgust factor. He also does that Siamese talking thing that they do.


Last night when the two far away sisters arrived for Thanksgiving, he had a full audience of adoring cat lovers oohing and aahing over his cuteness.


Today he has been sleeping of the time, like a normal cat, relaxing after his stellar performance last night. John hasn’t named him yet, waiting for him to let him know what it should be. T.S. Eliot knew the importance of the naming of cats. Every cat I have had has started out with one name and ended up with another, which seems to have fit better than the previous one.   So we shall see what develops.


But I hate to think what he’ll do to a Christmas tree.
Posted by Guenveur in Kent at 6:12 PM