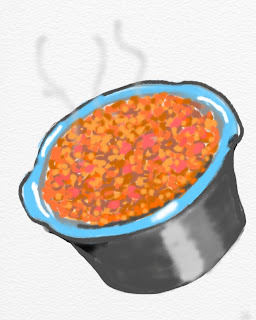 The Thanksgiving holiday is officially over here. Polly left for this afternoon and Emily left for last Monday. We had a really great time, of course, as we usually do. We ate well. The kids took some fine walks. They were impressed by the “new” downtown, which is bubbling with activity. We ate at Ray’s and the new Mexican restaurant. We shopped. This week John, Polly and I drove down to to Charm and the . We discovered that the old convenience store in Trail, home of the famous Trail baloney is now an antique/junk/you name it they have it store where John bought four cast iron jacks. The proprietor practically told us her life story and was very entertaining. Polly told her she should have her own reality show. She kept remarking how much John reminded her of her husband, who also worked with stone.


An interesting phenomenon occurred every evening after dinner. Everyone sat around the living room, silent except for the soft   clicking of their various digital devices, tapping away on Facebook, Google, YouTube, et. al. Of course, we had spent most of the day talking, talking, so ii was rather peaceful, in a sort of surreal way.


Actually, Emily will be in in a couple of weeks for the grand opening (and closing) of the Coloring Book Project,. The original date for this event was washed out by Hurricane Sandy. Since Emily was the co-curator of this epic art show, she felt the need to come back for it. She has promised to take photos/videos of the gala premiere. The gallery, called somewhat mysteriously ABC Rio Neo, is located on the lower east side of the metropolis. Besides Emily and me, the city of is represented by Joe Culley and Addie Cheges. Another Petrou is included, namely me talented granddaughter Katina. We expect a full report, not by the NY Times, but by our German correspondent.


The above illustration is of a family favorite, which we had for dinner the other night. They ate the whole thing, too.
Posted by Guenveur in Kent at 8:16 PM

And, I am proud to say, our art project, "The Coloring Book", has just booked a 2 week show coming up in May of 2013 at yet another gallery - stay tuned for details. (And maybe you and Aunt ML can attend that one!)