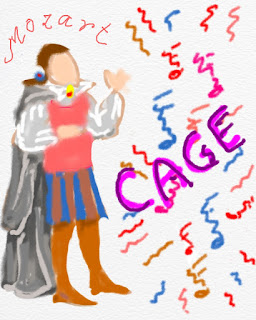 I am a couple of weeks late with this dispatch from the world of music. Two weeks ago I attended two such disparate events as to leave my brain chasing its tail, so to speak.


The first was the Met HD presentation of “La Clemnza di Tito,” a Mozart opera about the Emperor Titus of Early Rome. He put up with a lot of goddam treasonous crap from an ambitious woman and his best friend, but unlike a lot of off-with-their-head types, he forgave them and nobody died, which, if you want to know, doesn’t happen a lot in opera after they’ve been singing like bastards for a couple of hours. The music, being by Wolfgang Amadeus Mozart, was beautiful and the singers were worthy. This was in the afternoon.


That evening, I went to a “Celebration 0f the Centenary of John Cage,” who, if you didn’t know, considered all sound to be music. It was presented by the New Music division of the Kent State School of Music. I have been attending these concerts for a couple of years now, and in spite of the fact that this is not my kind of music at all, I have really enjoyed these performances. The director of the program is the former conductor of the university symphony orchestra and a composer and a very fine person. The students are enthusiastic and energetic and very, very talented. The music can be very difficult, but can also be a lot of fun and quite beautiful. This Cage concert included the famous 433, which involves a pianist coming on stage, sitting at the piano and sitting at the piano and sitting sat the piano – for 4 minutes and 33 seconds. A smart ass frond of mind times it and he actually sat there for 5 minutes, but John Cage did materialize to discipline him with a siren or a rain stick, both of which were heard in other parts of the program. People stood around in various parts of the hall, reading excerpts from John Cage’s writings. Noises were heard both off and on.  There was an exciting percussion number and a very nice wind chamber piece. There was an ongoing video of snowy, dirty streets somewhere in the U.S. of A. Since Cage died over twenty years ago, I couldn’t help but wonder what he would have done with some of the digital devices. Blows the mind.


However, the contrast between the two composers was extreme. The geezer brain finds it difficult to process. But I am glad that I went all in one day from the 18th century to the future that John Cage imagined in the 20th.
Posted by Guenveur in Kent at 3:03 PM