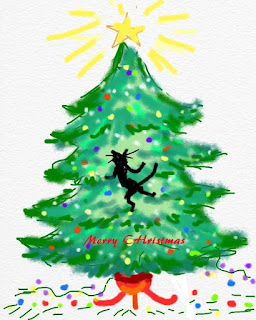 Since I was not up to doing much running around for the past three weeks, I was not able to get the usual Christmas card materials needed to print up my cards. So I am taking this opportunity to "send" out cards to friends and family and perhaps the odd stranger who happens upon this blog. I did this drawing at about the time the kitten arrived here. I had assumed that he would turn the Christmas tree into his own private gymnasium. However, with a little judicious use of a spray water bottle, John taught him early that the tree was not for him to leap about on. He, the cat, is a fast learner and he has let the tree alone.He has had plenty of attention from his adoring family. Sally got him his own cat stocking full of little toys, although discarded wrapping paper has proven to be the equivalent of a toy box. He pounces like  Milne's Tigger. Last night he played for an hour with a twist tie. Would that we all could be satisfied with such simplicity of amusement.
As I write this, the Christmas dinner is cooking away in the slow cooker, thanks to Polly's culinary skills. John fixed a big breakfast, so we are pretty sated. We have vowed to do some singing tonight, putting away the IPad and ITouch devices. We had Facetimed the German branch of the family, while they have already had dinner, cooked by Emily, Chris and Katina, it looked spectacular via Facetime.
The kitten finally has a name, Sixto, after a baseball player Since the late, great Dupree was named for a football player, this seems to be natural for a cat name. He will probably end up with some other name, but that will do for now. Right now he is stretched out on a soft chair, plumb tuckered out from chasing paper and twist ties. He makes his first appearance on my Christmas card, replacing Dupree, who had the starring role for many years.We hope he will be able to carry on in this role for many years himself.
Posted by Guenveur in Kent at 3:11 PM