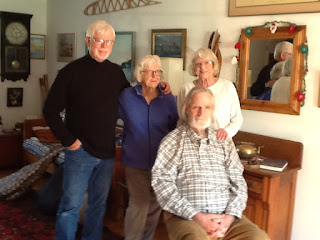 My little brother Ed, who tuned 76 last week organized a trip for Michael, the next to youngest brother (77) and me to drive up to Corning, N.Y. to visit our sister, the world famous Mary Lu Walker. The drive up NY State Rte. 86 is one of  my favorite rides, pretty even in November. It was the day after the election, so some of s were quite joyous in a very subdued way, since some of us had been on the other side. Being civilized  and loving people we shelved all discussion of the election outcome.
We had a lovely sunny, warm day and arrived around 4 o'clock in the afternoon.
We were pleased not only to greet our sister and her husband Don, but niece , pretty Peggy, down from Buffalo. She had brought dinner with her, and since she is a marvelous cook, we felt coddled.
We wined and dined and talked and laughed. We do stay in touch, through the Internet and the phone, so we didn't have any new news, but it just felt so good to be together in the flesh.
The next day, we test drove ML's new Spark, a sweet little blue mini sort of car from Korea, and had lunch downtown at the fine deli. Another niece, Jane, arrived from Ithaca, with Speck, one of her Corgis. She brought with her a smoked turkey from the flock she raises for food. Jane gave us a demo of the skill training she does with her Corgis, and Speck performed perfectly. Cuter than a baby duck, that dog is. We did more talking, had a massive photo session with Jane's Hasselblad and Ed's and my IPads. Later on I Facetimed Emily in Germany and she joined the conversation.  We had a demonstration of the miracle of the cyberworld. Ed showed Emily the pictures from the morning, then Emailed one to her which she put on Facebook, all within minutes. Almost too much for us geezers to comprehend although we are all computer literate and have been messing with this stuff for years. It goes so fast now.
All in all, it was a time of storytelling, laughter and affection. It had been two years since we were together, and that was at a wedding and there had not been time to socialize with each other then. It's so good to be with each other, especially as we are getting older.
We are very lucky. 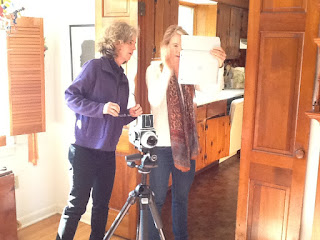 Posted by Guenveur in Kent at 4:27 PM