A Tale of Two Tails 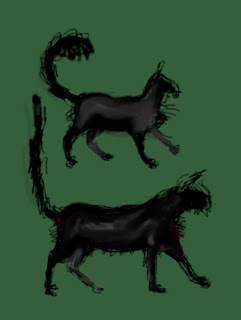 Sixto looks so much like the late Dupree that I have a hard time not calling him by that name. He is quite different in personality from Dupree, being much more outgoing, and not at all afraid of loud noises, like vacuum cleaners and thunder. Since his fur has grown so long, he resembles him even more. It’s like having the ghosted of Dupree around, friendly-like.


A significant difference in appearance is their tails. Sixto has the longest tail I have ever seen on a domestic cat. He looks like a lemur, holding it straight up. As you can see, Dupree curled his up like a plume. In both cases, there is feline pride displayed, swanning around in front of us poor humans with our puny two legs and nothing to wave behind us, having lost our tails thousands of years ago, victims of evolution.
Posted by Guenveur in Kent at 9:54 PM