My Life in the Theater 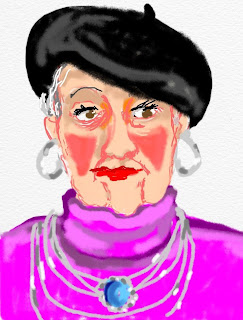 For a couple of years before I went away to college, I volunteered at the local community theater in Springfield, Ohio.We had a director who had been with the Clare Tree Major Children's Theater, a traveling company which put on plays for children. His background was in set design as well as in directing. He was no Corky St, Clair of "Waiting for Guffman." I had no interest on appearing on the stage, but worked behind the scenes, happily paintings flats, occasionally doing some special scenic design projects. The rehearsal and set construction venue was in a warehouse sort of space downtown over a local bank. Shelly, the director. did all the set designing and we backstage workers followed his instructions and produced some quite decent effects while eavesdropping on the play rehearsals in the front of the large space. I loved everything about it, the smells, the magic of turning flat canvas into brick walls, old wall paper, wooden paneled rooms.

The people I worked with were an interesting cross-section of our mid-size city in southern Ohio: a couple of judges, school teachers, college students, secretaries, store managers, housewives, a radio personality, all in love with theater, especailly the hometown variety.

Mrs. Grace Johnson Johnson,, above, was the prop mistress. She always wore a black beret, masses of silver necklaces, silver bangle bracelets up to her elbows, heavily rouged cheeks, brilliant red lipstick, and long skirts. Her gray hair was very short and she wore large silver hoop earrings. I never knew her story, but assumed she was wealthy. Shae looked like an aging flapper, perhaps, but she would have been in her 40s or 50s in that era. She had a rather severe look, and I don't remember ever engaging in conversation with her. She was a constant presence at the theater before and during productions.

I had no intention of ever appearing on stage, but the last year before I went away Io college, I told the director that if he had any really, really small parts, I would like to have a shot at it before I left. The next play was one of those so popular in the 40s about a city couple who buy an old house in the country and have to cope with the local yokels (or what the playwrights in New York assumed people were like outside the city limits of NYC.) It was called "January Thaw" and had probably been a one night wonder on Broadway at one time. There was a small part for a maid, described in the script as a buxom country lass. Since I weighed about 95 pounds with stones in my pockets, I didn't think I was quite suited for the part, but the director said there was a lot of latitude in casting and that it was a very small part, and mine if I wanted it. I figured I could play buxom, so I accepted the part.

Another newbie was George, a young lawyer recently out of the service. I used to babysit for him and his wife. He was going to play a lawyer, of all things. He drove me to and from the rehearsals and as the time neared for the performance he confessed that he wished he hadn't volunteered as an actor. I had been feeling the same way. He said it must be what it was like to be having a baby, too late to back out but not wanting to go through with it.

We moved from the practice space to the school auditorium where the performances were done. One of my big scenes was to scream at the sight of the yokel stud with whom I apparently had some history, and rush off stage. The character's name was Matt Rockwood. At the final dress rehearsal I screamed "Rat Mockwood" as I dashed off. The dire cor assured me later that I would be fine at the performance because I had learned from my mistake. Right.

A key prop was an antique china Victorian chamber pot, which had an important role in the last act. It stood by the door on a slender stand. Not hard to know what would befall that delicate Victorian receptacle. On about the third night of the run, as I ran off-stage, having gotten the stud's name right, I crashed into it and it shattered with a loud noise, drowning out the next few lines, I'm sure. I skidded into the hallway, where the director, a professional about thses things, handed me a broom and another Victorian antique chamber pot. "Just go out there and sweep up the pieces and put this one on the stand as if It is a normal duty. People will just think it's part of the plot. " I  knew the antique had belonged to Grace, as did the replacement. I felt terrible. "Don't worry." the director said. "She has a house full of these things."I went back onstage, swept up the pieces and replaced the new chamber pot on the rickety stand. The play was saved. I managed to avoid the pot for the next performance . Grace Johnson Johnson never mentioned it to me.
And I never went on stage again, ever.
Posted by Guenveur in Kent at 5:47 PM

I love this story!

Thanks Guenveur! Will you please post this story's link at your photo of Grace Johnson Johnson, in your gallery for our class? I know everyone in the Lucky Drawing 102 class will appreciate it, a lot! I think it's grand! Thanks! Susan