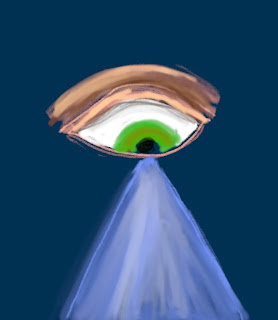 When one reaches an advanced age, that is, becomes a genuine geezer, one has a rather panoramic view of the history one has lived all those years. Events come and go and come again. The BIG Decision Makers develop policies that they deem necessary, start wars, decide who counts and who doesn’t, argue about what the Founding Fathers really meant when they constructed the Constitution, and even though we vote for them, the government machine takes over and we have no control over what happens. Really.


One of the areas I have seen kicked around is that of our right to privacy, out right not to have the government looking over our shoulder and using the information gleaned to abridge our “freedom.’


Let me take you back to the so-called idyllic 50s, the era that some people want to bring back. The scene is , to Fr. James Fleming’s Social Theory class. It was a senior level class in which we studied how, over the centuries of civilization; men had developed the means of forming society in workable ways to create the best possible outcomes for all – or in some cases for a chosen few. Included among these social philosophers was Karl Marx, naturally. Now in the class was an older student we had never seen before,; since most of the rest of us had been together for at least three years as sociology majors we all knew each other. He was very quiet in class, not asking questions or commenting. He was also dressed very formally, not in the casual way of the average student,. One day, after class, he joined a group of us at lunch. He had a lot of questions about Dr. Fleming, a wonderful teacher and scholar from . “He sure talks a lot about Karl Marx,” he said. We just stared at him. “It’s a social theory class,” one of us said. “You can’t ignore Marx.” He didn’t look convinced. He disappeared from class soon after that. He had FBI written al over him. SO far as I know, Dr. Fleming was not assigned to a list of subversives, but the watching had begun.


In , the state of had its own House Un-American Activities Committee, which forced the to establish a loyalty oath for all faculty, including graduate assistants.  To teach at you had to swear that you were not and had never been a member of any organization that threatened to overthrow the government of the . They also established a gag rule on certain speakers invited to speak at university and class events. McCarthy and the Congressional un-American Committee were gearing up for the major witch hunts of that time. Nothing was too absurd: an acquaintance of my husband’s in graduate school was in charge of the classic film series, showing such films as “Grapes of Wrath,” “The Ox-Bow Incident,” “Citizen Kane,” etc., the kinds o films to stimulate discussion as both art and human behavior. (In those far-off days college students were actually interested in ideas, rather than special effects.) The young man was called before the Ohio Un-American Activities Committee because – gasp! – some of them had been written by the notorious Hollywood Ten, writers who had refused to testify against others who may or may not have once belonged to the Communist Party, or perhaps had fought with the rebels in the Spanish Civil War against the Fascists. It was the committee which decided what was subversive; they had a little list, which included groups like Blue Star Mothers, those dangerous government over-throwers who had had a son serving in WWII.  Our friend had to face these yobs who probably thought “Grapes of Wrath” was about the wine industry. Our friend was not hauled off for violating the loyalty oath, but the film series was cancelled.


The atmosphere in was oppressive, but worse was to come.


For reasons that I still do not understand, Joseph McCarthy was allowed to run roughshod over the civil rights of hundreds of people. People lost jobs, were black listed for years; He kept waving papers around, shouting that he HAD NAMES!!! Interestingly, one of the young lawyers on his committee was Robert F. Kennedy,


Two brave men stopped him, finally. One was Edward R. Murrow, and I you saw “Good Night and Good Luck.” you know what he did, when even the president seemed to cringe and avoid confronting that major villain of his presidency. The other was Joseph Welch, a Dickensian old lawyer, who took him on during the Army-McCarthy hearings and smashed him but good.


And now we have the IRS snoops checking out certain groups. It’s still wrong, but the magnitude of the offensive actions doesn’t come close to past skullduggery in the name of national Security.


In another sense, we are under constant scrutiny through our credit cards, computer pages, Twitter, Facebook, merchant preference cards, store cameras – we’re all in there.

Thanks for writing this all down, so that I can share with people I've told this about. Compelling stories indeed, and a wake-up call to anyone who thought the 50s were an idyllic time!