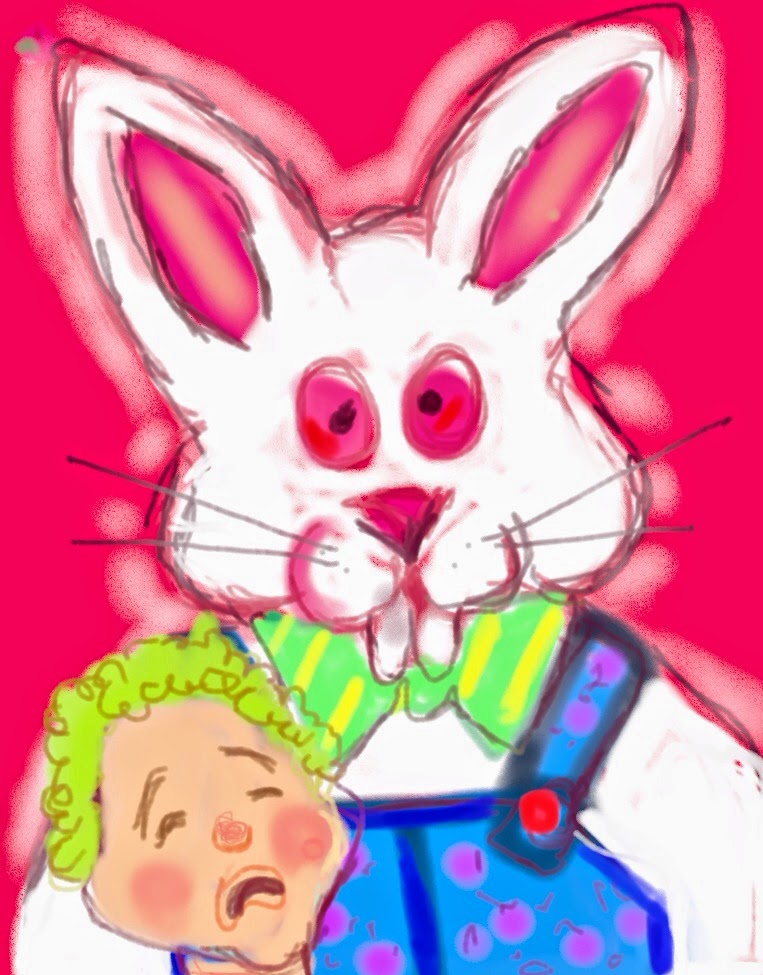 I have been wondering,this Easter season, who had the idea to create these cheesy, grotesque giant rabbit costumes, presumably to delight the tots. The only decent giant rabbit, Harvey, was invisible, and only seen by Elwood P. Dowd, and was reportedly a charming companion. These behemoth bunnies with loopy eyes and maniacal grins loom over tiny people like an incipient avalanche of white fake fur.
Bunnies are small, soft, benign little creatures, nothing like these hideous monsters.
Who possibly could have thought that a two year  old would welcome such an ogreish apparition on a spring holiday? I've never been close enough to one to hear  what must be a muffled voice dispensing cheery words to a terrified toddler, but it can't be pleasant.
No doubt the inspiration came from those Disney park characters, those giant-headed cartoon reps which hug excited Midwestern kiddos as they arrive at the Mecca of All-You-Can-Eat entertainment centers. The Disney characters are well known, of course, and not too grotesque, or connected with dyed or plastic eggs, so perhaps they are less frightening.
I also have a problem with parents who drag infants to Easter egg hunts and Hallowe'en Beggars' Nights,and I don't think the little ones should have to suffer for their parents' utter cluelessness, especially when it involves a creepy glandular bunny with the face of a serial killer.
Posted by Guenveur in Kent at 7:43 PM

I cannot stop laughing at the apt description - cinematic, in the horror movie sense.