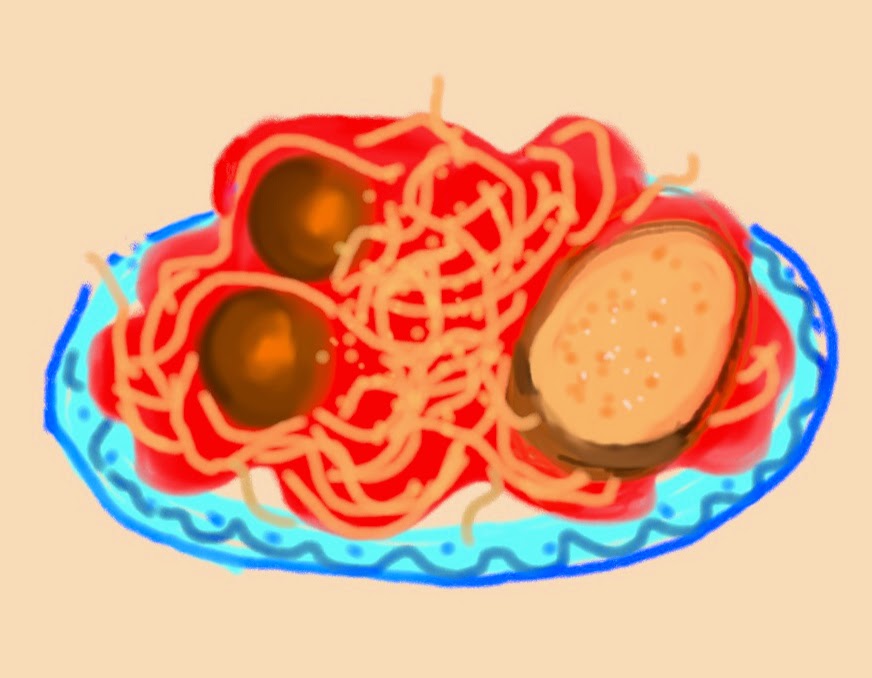 Last Friday was the last Lutheran church spaghetti dinner  ( an oxymoron if ever I heard one) until September. The First Christian church final spaghetti dinner was  three weeks ago. I did a post on church dinners a few years ago,  when we were going to Swiss steak or chicken and biscuit dinners, mostly in small towns around the county. They were sponsored by churches, but sometimes held in the village hall and were very much the same: meat  and gravy, mashed (real) potatoes, green beans, corn, applesauce and many colorful and sugary desserts.
Now we confine ourselves to the two spaghetti dinners right here in town. Both of these offerings started fairly recently in  the church supper business. In each case, the congregations had built a new church hall for various uses-weddings, Eagle Scout investitures, altar society meetings, maybe even quilting bees for all I know. They can be rented to groups and generate some cash for the church.The dinners were started as a way of paying off the mortgage debt created by the building of the halls, where the dinners are held, which seems redundant, or something.
The Christians offer plain marinara or meat sauce, salad, beverages and homemade desserts:pies, cakes and brownies. The Lutherans give you plain marinara or meatballs, much better salads, garlic bread, beverages and desserts, including really good German chocolate cake in honor of Luther, I guess. Their hall is quite magnificent, designed to fit their semi-Victorian Gothic stone church. Their dinner is a dollar cheaper and they donate a portion of the proceeds to different social service agencies each month, thus demonstrating civic involvement and rendering to Caesar and all. I only know this because an acquaintance who volunteers there told me. I do not know if the Christian church does this sort if thing, but I do know that they've paid off their mortgage on the social hall, which is a good thing, along with providing a night off for the family cook once a month, which is also a good thing and all.
For the next three months I shall have to make my own damn spaghetti with no dessert to follow, since I don't do that sort of thing. It makes for a long summer.

Posted by Guenveur in Kent at 9:54 PM