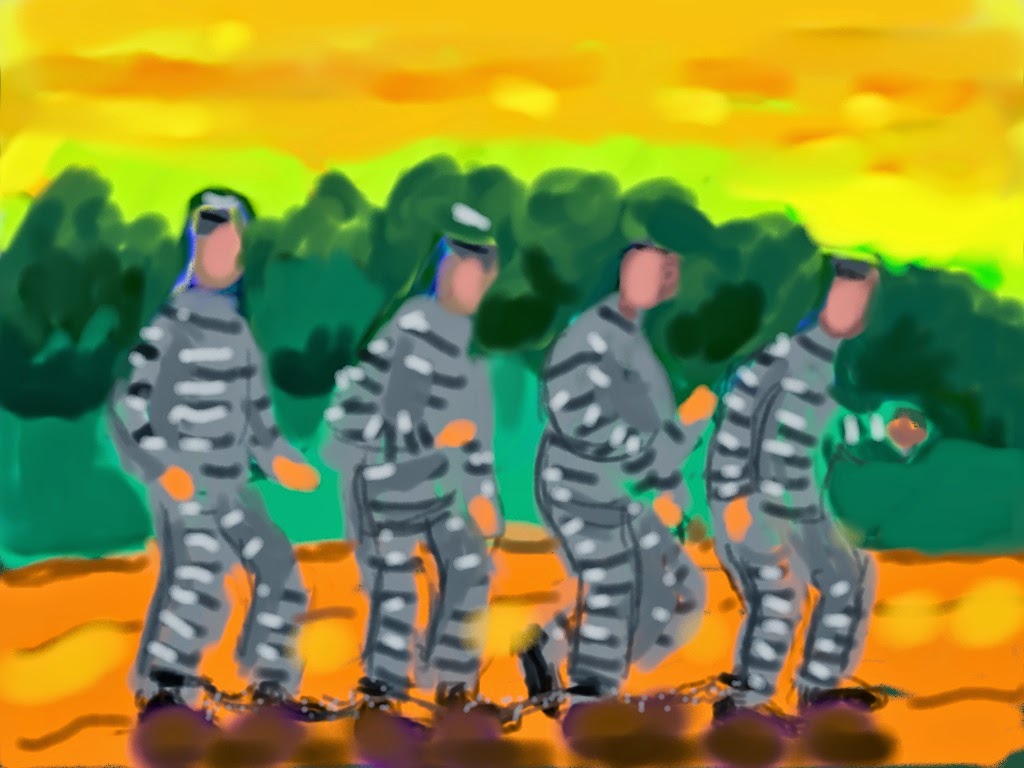 There were other pleasures and sights on those week-end drives into the countryside around Atlanta in the 3os. At that time, before food regulations made  "amateur" food vendors unable to peddle their wares on the roadside, inexpensive treats were available to a car full of  overheated family members.
By far the favorite, to me, was iced sugar cane. Along with cotton, Georgia farmers grew sugar cane and peanuts. The sugar cane stalk was cut into 6 or 7 inch long pieces, and kept in ice chests. When you bought a piece, the vender would peel back the tough outer layer, revealing the sweet white pith to suck on. To me it was as good as ice cream
Farmers would sell raw peanuts, the soft green shells hanging from bushy green stems,. My father was the ultimate peanut lover, and figured he could roast these peanuts as well as Planters, which he bought in  two pond bags. However, as I remember, the home roasting experiment did not turn out to match the flavor of the commercial product. The green shells turned the right color, the peanuts turned brown, but they still tasted "raw."He never tried it again. (When he died many years later at the age of  91, my older brother and sister and I took part of his ashes down to Montgomery, Alabama, to the family plot. My sister first went to a peanut store and bought a small bag, of in the shell peanuts,  which we sprinkled on the plot along with the ashes. As we left, a few Alabama squirrels  were having a little celebratory party.)
Another common roadside treat was watermelon, sold by the slice,kept nice a cold in a big wooden  box full of chipped ice. It was always the perfect treat, given that there was in those days no such thing as automobile air-conditioning, other than opening the windows to the hot Georgia summer air.
In the heat, in a car full of sweaty kids, there was often  behavior that evoked the  perennial Dad threat from the driver: "If you don't stop that fussing, I'm going to stop the car and put you all out! "  It never happened, but we could never be sure he wouldn't do it.
A more sobering sight, not involving food treats, was the sight of chain gangs. Never on Sunday, though, Georgia being full of Baptists who took  the Sabbath very  seriously, as in no dancing, and no playing card games. Apparently the chain gang guards were home and not dancing or playing "Go Fish ,"  as the prisoners were hanging out in their luxurious  wooden  bunkhouses behind the barbed wire fences. When they were working along the road, it generally involved shovels and pick axes and guards keeping their eagle eyes on the prisoners. I don't remember if the prisoners were integrated racially, because that would n't have registered with me. I suspect not, because I do remember some which were all African Americans, then called "Negroes."Who knows what their crimes were? During the Depression one could get thrown into jail for stealing a loaf of bread.  One could be thrown in jail for being Black.
It  was like "Les Miserables" in the 20th century. It was a common sight along  the red clay back roads of Georgia.  And bing Black was a perilous condition, rich or poor. The sight of these men, of whatever race, was saddening, and for once, we in the back seat were quiet.
By the way, the Klan, in all their white sheeted glory, marched in the annual Decoration Day (the South's version oh Memorial Day) parade. Since they hated Catholics, too, having burned a cross on the grounds of Christ the King Cathedral, they were roundly booed  by us as they shuffled by. I remember one woman shouting, "Shame on you!" She was white, thus safe from being taken away to a chain gang.
This was the South in the 30s, with pleasant country drives, and unpleasant realities.

Posted by Guenveur in Kent at 7:58 PM