The Things We Did 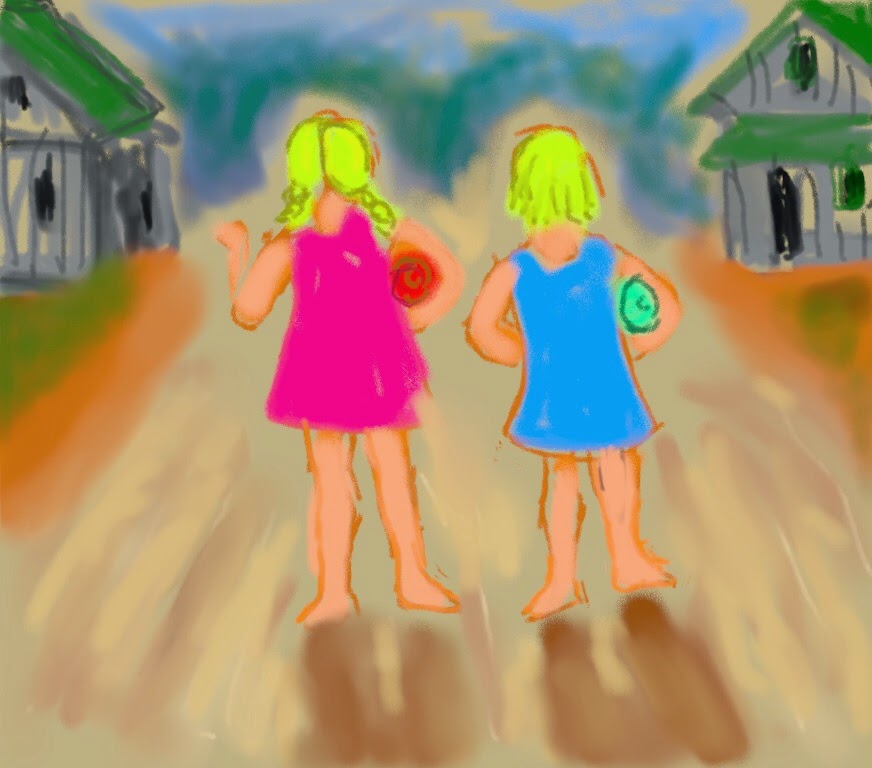 Either the world was a safer place in the 30s or our parents were just plain careless. We had an enormous amount of freedom as children. When we weren't on Sunday drives, we walked everywhere by ourselves, once we were school,age. I remember walking by myself to kindergarten, once my mother had walked me  me there a few times. It was not just a couple of blocks, but it never occurred to me that I wasn't safe. I had to cut through a golf course, where I once helpfully picked up a ball and handed it to the golfer who had just putted it. He thanked me and didn't kill me.
The walk to our elementary school was  quite a few blocks and involved a few busy streets and there were no crossing guards. We were very bright children, and knew enough to look both ways. However, I did once misjudge an approaching street car, dropped my books as I skittered  across
and lost a corner of my 4 th grade geography book as the trolley screeched to a halt. Not sure why I did that because I was on the right side of the street at the time. This happened in front of The Wren's Nest, the home of  Joel Chandler Harris, the journalist who recorded African folk tales and saved them for posterity in the person of Uncle Remus, who is not politically correct today. The house was then and is now a museum. Our little nearby branch of the Carnegie  Library was also called The Wren's Nest in honor of Harris. We also walked to the library, which was near our school.
We were always looking for interesting ways to walk to and from school, since there were a lot of different ways to get there, all of which took about the same amount of time. Our school, St. Anthony's was on a major street, Gordon Street. It had been used by the Yankees as they marched in to burn Atlanta 70 some years earlier. When my parents first married, they lived in a boarding house on Gordon Street, owned by two old ladies. They told my Yankee mother how terrified they had been at the sight of those soldiers, pointing out to her the route they had taken right in front of their home. But  I digress. One of my very favorite routes was an alley behind some of the big houses along Gordon Street. Along these alleys were cabins, which were inhabited by people who worked in the big houses. The alley was unpaved. The dirt yards were fenced and contained chickens and small  vegetable gardens. In the winter there was smoke curling up from pipe chimneys, with  great smells of burning wood, and a faint scent of kerosene.  I loved those aromas  and tried to imagine what these little houses looked like inside. I never saw any people around outside, because they would have been working. I found the whole thing mysterious and can still see it in my mind.
In the summer we swam at Mosley Park. It was free before noon, so that's when we went. We always got typhoid shots from my father's cousin' s  husband, who was a pediatrician and apparently didn't trust Atlanta's public pools. Our route to the pool was as varied as our route to school. My sister and I would start out while it was still cool. We discovered Chicamauga Street, an unsaved lane of very soft, dusty, pale, whitish sand that felt so good on our bare feet. There were weathered, dilapidated houses on either side, with no visible inhabitants.  When I think of two little blond girls walking through this deserted area, I have to think of the possibilities that could have happened. If course, one of the things is that we never told our parents about these excursions, because we never felt there was any danger. We were forbidden to play in the sewer Creek woods (don't ask) so, of course, that's where we went...adventure was our aim.
I think how the world is such a dangerous place for children today - or does it just seem that way, with constant news available with the press of a button, bearing fearful stories of abductions and assaults. Were we just lucky? Or did those prayers to our guardian angels actually work?
Posted by Guenveur in Kent at 8:11 PM

I think the world isn't as dangerous for children as the media likes to make it sound. A real shame you don't have 'free range children' in the U.S anymore.

I saw three kids walking with gear on their backs and a 2 liter of pop walking toward the woods.It reminded me of camping out when we were early teens.