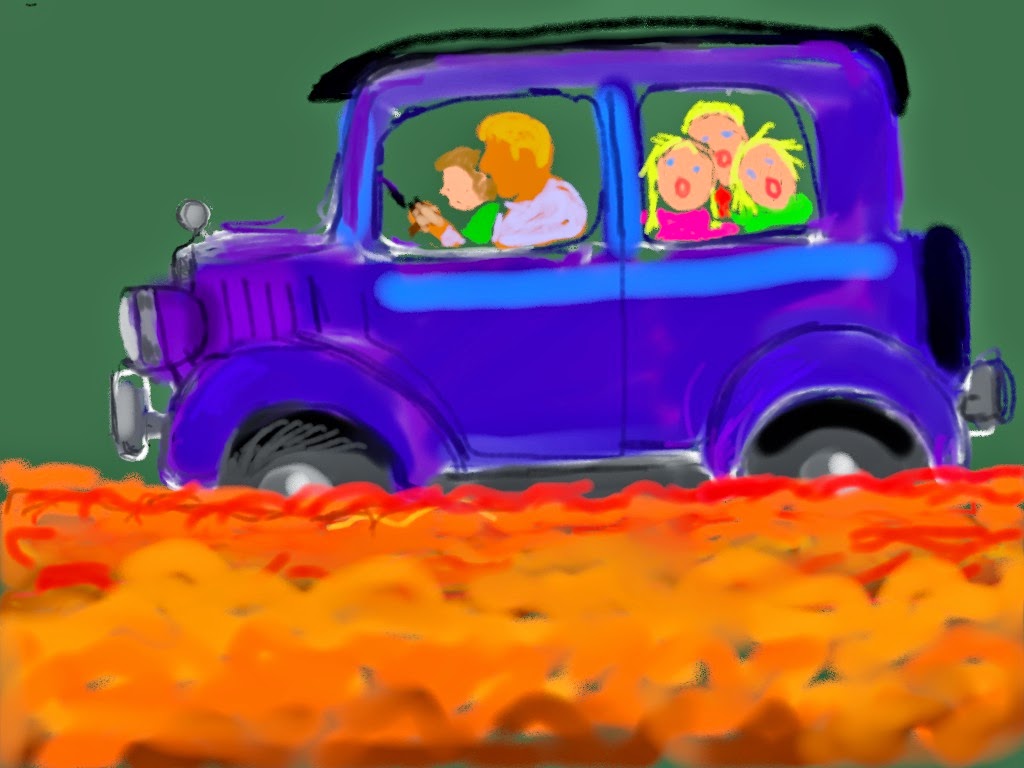 Back in the 1930s, gas was cheap, which enable families the inexpensive pleasure of the Sunday drive, an entertaining excursion into the unknown. In those days of un-air conditioned cars, this could be a sweaty experience in a Georgia summer, but my father persevered, perhaps out of his own sense of unrealized  adventure. Every Sunday morning,the Atlanta journal would publish an itinerary for a short trip to an interesting destination not too far from the city. We didn't always use this for a guide, but it appealed to my father  once in a while. The most memorable ride, to me, was to what I remember as Muscle Shoals, but not the one in Alabama. I was never sure what a "shoal" was, but it sounded interesting.
The back roads of Georgia were red clay, often slick and slippery. All of Georgia seemed to be red. The Chatahoochee River was red. The woods where we played was surrounded with red clay cliffs. The lake where my neighbors had a cabin was yellow with banks of ocher clay.  (I never saw blue water until we crossed the Ohio River  on our way to our new home in Ohio. We marveled at the sight as we crossed the bridge to Cincinnati.)
It must have been spring, and there must have been a recent heavy rain on the trip to Muscle Shoals, because the roads were heavily rutted and slick. Our 5 year old 1931 DeSoto slid about, in and out of ruts which started getting deeper  and sloppier. Finally, the wheels started spinning, could get, as my father used to say "no purchase" ( which in his Alabama accent came out as "pou chase") and we were STUCK IN A RUT!- condition which, for some reason, terrified me. Maybe I had heard tales of people getting stuck in rites and never getting out, spending the remainder of their pathetic lives rut-captured. My older brother and sister did not seem to share this terror, being much cooler children than I was. I think my father was probably embarrassed, having failed to negotiate the bad road as he imagined a ship captain would have negotiated a stormy sea. And he would further humiliate himself by having to ask for help.
There's something about rural areas that has always amazed me, at least in the old days. If your car staggered into a deserted village with one gas pump outside a falling apart grocery store, and no one on the street but a stray dog, as soon as you stopped, four or five guys in overalls would appear, open the hood and start discussing possible diagnoses, methods of repair and fall to work soon and send you on your way. (Of course, nowadays you've got your serial killers and "Deliverance"  psychopaths, so it's probably better to just stay in the car and die of natural causes.) Anyway, some of those overalled types came to our rescue at Muscle Shoals, or wherever we were when the clay mire trapped us. We headed back to the city with its  paved roads and never attempted that particular adventure again.
I must mention one favorite Sunday drive that never disappointed. Paces Ferry Road was where the very wealthy Atlantans had built their mansions. Bobby Jones, the Tiger Woods of his day, had  a beautiful estate which was on our way to the star attraction of the area, the Candler palace, home of the folks who brought you Coca Cola. A pair of immense wrought iron gates opened to a sweeping drive at the end of which was a veritable  castle. What was so unique about this gawk festival is that as cars slowly reached the vista beyond the gates, each would pause for a few seconds to allow the passengers time to take it all in, then move on to let the next carful take its
turn. No one ever honked. One more recent Sunday, when I turned on the TV to watch "The Good Wife," it was delayed because of some football game, and a program called "The Great Race" was still on. A bunch of fit, but sweaty people were apparently ending the race in Atlanta, right at the Candler castle! It looked small.

Posted by Guenveur in Kent at 2:23 PM

Another wonderfully entertaining post! I remember the country drives you took us on in OH when we were growing up. I feel sorry for today's kids who are plugged into DVD players or iPads the minute they get into a car. They'll never realise the pleasures of watching the passing scenery and daydreaming.