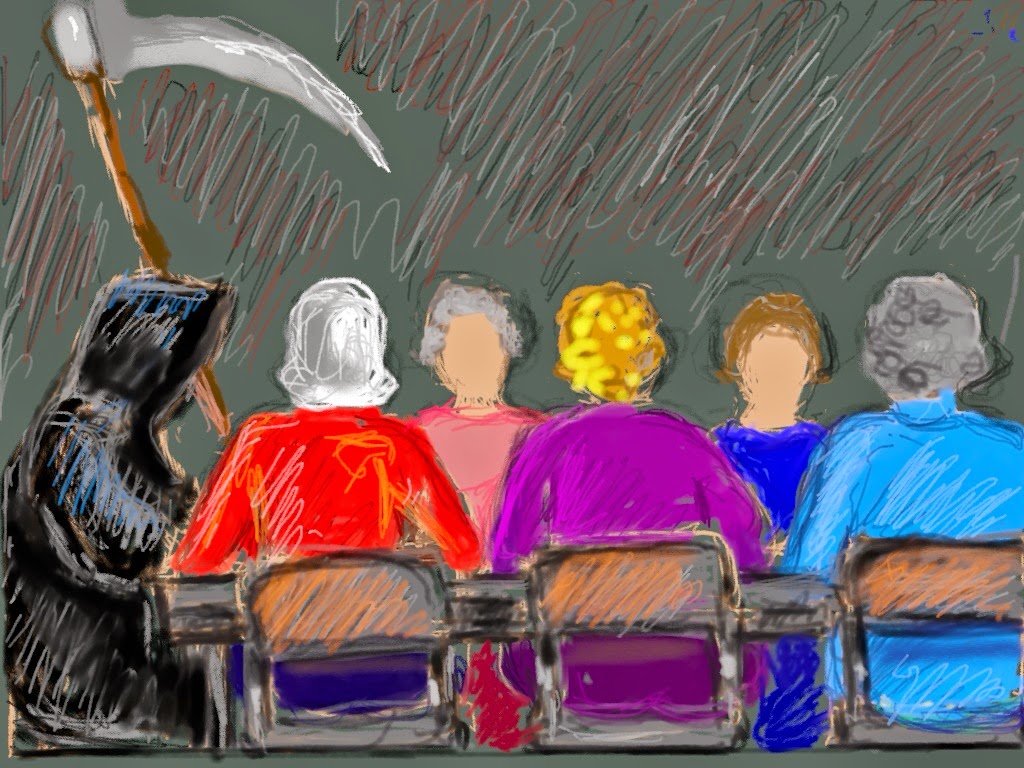 Alert: Some may find this post disturbing/ Don't say I didn't warn you.
For the past several years I have joined a group of convivial, bright, interesting and accomplished women for lunch on Fridays. Several of them are in my water aerobics class, and others I have known slightly from other activities in town or from the university. Our ages range from late 50s to 91, and in the summer the delightful and intelligent 12 year old daughter of out youngest member of the group. Conversation ranges from fluff to serious issues.
Sadly, one of the most interesting and brilliant women is in hospice, and not expected to be in the world much longer. She does not want company, other than family and a very few close friends. Before her rapid decline early this summer, she talked about her frustration with
the world situation. She is one of those people who believe that if everyone would  just think rationally, we could deal with complex problems and improve the lot of the world's citizens. She's a writer of rational polemics, a musician and a scholar. It's not enough that she has personally spear- headed some incredible improvements in the quality of life in this community, but feels that she has not made a dent in the world at large. It's made her what my friend Nancy calls a COW:Cranky Old Woman.
The conversation began with a report from one of those close friends on Caroline's current condition. This sparked a discussion of what's now called "end of life" issues, and how one handles them, spanning "drug  the hell out of me" to "just bring me a gun." Right now Caroline is heavily medicated, receiving palliative care, but is able to talk, but not about her impending death. Among this group of women, there is no talk of "heaven" or any kind of afterlife. The majority of them are Unitarians, and the Episcopalian   joined that church just to sing in the choir. (Caroline is a Unitarian, and the first time that minister came to visit her, Caroline threw her out. Last week, she let her stay.)
Another woman  who overheard our discussion- she was at the next table and someone we all know- and knows Caroline, joined us and talked about the death of her partner of 42 years who died this past June.
At this point, I remembered an incident in another restaurant some 20 or so years ago. I was visiting my sister in Corning. Our mother  had died a few months earlier. My brother- in- law and she took me to dinner in a very nice, rather small restaurant. It was mostly empty with only one couple at a table way across the room. We were talking about our mother's death (she was almost 91 and had been in failing health for over a year, since our father's death and was in a nursing home.) Our oldest brother, a doctor, had come to Ohio from Montana to visit her, and she died just after  his visit. We began to talk about the possibility that perhaps he had helped her in some way. We were not speaking loudly, but the couple across the room had apparently overheard us. At any rate, the man suddenly appeared at our table and requested that we stop talking about this subject, as his wife had recently lost a favorite aunt, and found our conversation upsetting. My sister apologized and I stifled my impulse to ask why they were eavesdropping and why weren't they  talking to each other about something pleasant? Or at least eat something crunchy so they couldn't hear us.
I guess restaurants should have a "No Talking About Death" section.
Today's lunch talk didn't seem to bother anyone. We are all concerned about our friend and only want peace for her, and soon. We have missed her already.
But we had Death at lunch today in her honor.

Posted by Guenveur in Kent at 9:10 PM

What Nancy said. I am sorry I will not be able to see Caroline again, but I am also very glad that I got to meet her and experience her grit and tenacity, not to mention those bright blue, sparkling with intelligence, eyes.