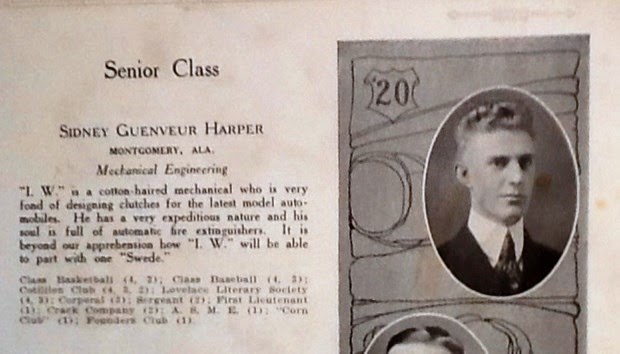 My sister and I as children were indefatigable snoops. I've written before about breaking into our brother 's sacred closet office. We also seemed to be curious about our parents' lives before we were born. They were still young, in their thirties, when we were wondering what they'd been like when they weren't so old.
We looked into the large trunk and found things like my mother ,s wedding dress, or at least pieces of it. She had cut it down to make a regular dress for herself, so the trunk contained what was left of it- large sections of midnight blue silk velvet. We loved the feel of it and what the dress must have looked like. Both she and my father had photo albums, filled with small black and white pictures of them as young adults, but they looked pretty much the way they still looked, which was, to us, old. Their wedding picture showed them in front of a church in Holyoke,, Massachusetts, way up north. Daddy was wearing a suit, much like the suits he wore to work. Mother was wearing her velvet gown, with long, open sleeves, tied with ribbon at the wrists, and a wide brimmed hat.
We used to go through those little albums. Most of the photos in my father's were taken during his days at Auburn and was full of high jinks and silly poses. Mother's were from her late teens and early twenties, equally full of stringing poses, in middy blouse and bloomers, with her and her friends, hiking, swimming, and pretending to  smoke with rolled up paper "cigarettes',  dancing like Isadora Duncan in a meadow.
Our absolute favorite resource was their yearbooks. We practically memorized the names of some of their classmates. We loved the little paragraphs about each of the students. My father's claims "and his soul is full of automatic fire extinguishers." The yearbook also included each young man's nickname, which my father claimed were made up by the yearbook staff. His was "I . W . Harper," which we didn't get until we were much older. His best friend was " Swede" "Nelson, who became Uncle Nelson to us. Also pictured, as a sponsor of a ROTC unit, is Miss Zelda Sayre, of Montgomery. She would come up for the dances. My father knew her from home and was one of her partners on the dance floor. She later married a Yankee from Minnesota by the name of Scott and became a notorious representative of the Jazz Age.
Mother's high school annual was smaller, but we did the same thing, reading about all the old looking boys and girls of the class of 1917. When she went to her 25th reunion, we asked her especially find out about one Ambrose Shea, whose glossy black pompadour fascinated us. I think we knew these students better than she did. The little  squib accompanying her photo mentioned her "three cornered smile," which she couldn't explain.
I still have one of the photo albums and both yearbooks. All are falling apart from our incessant paging through them all the years of our childhood. The young people in all of them still look old to me. My own children, so far as I know, have not found my own yearbooks interesting at all. They have probably done their share of snooping, and that's all right. Parents are mysterious creatures.

Posted by Guenveur in Kent at 6:19 PM