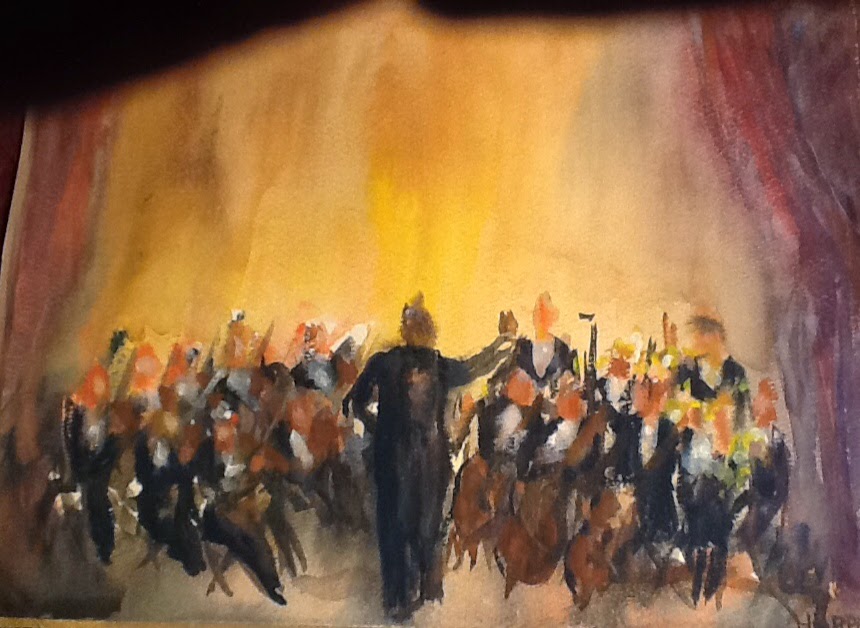 While sitting in the old University Auditorium yesterday, listening to a wonderful performance by the Kent State University symphony orchestra, I found myself thinking of all the fine things I have heard and seen there over the years, especially during my time as a student from 1948 - 1951. The program yesterday was of French compositions from the late 19th  century :Faure, Saint-Saen's, Ravel and Chaubrier.  It is rather dreamy stuff, which must be why I started thinking of  the past while the music floated through the air.
One of the first events I remember was the Fred Waring orchestra and his famous chorus. He had a popular radio program, sponsored by Chesterfield cigarettes. His forte was his choral arrangements of popular songs. (He also, it turned out, invented the Waring blender, but that was later.) I believe we were part of his live broadcast, which was exciting in those days, when radio personalities were stars.
He may have been on a college tour to hold auditions for his famed chorale.
The next even I remember was the appearance of the Cleveland Orchestra. Although George Szell took over in 1946, I think the conductor that night was Joseph Gingold who was the first chair violin in those days. It was such a thrill to have this orchestra right on our campus. I decided  to take my glasses off to see what  the group looked like blurred so I could do an impressionistic watercolor the next day in class. The above illustration, 60 some years old, is my myopic vision of a musical institution which I would come to love many years later.
Perhaps the most memorable events of all was the time that Menotti's opera "The Medium"  was presented by Cleveland's noted Karamu Theater, a part of the Karamu Settlement House, an inter- racial treasure on  the East Side. Karamu offered theater, dance and art classes to the people of the inner city, and it's still going string after almost one hundred years. The medium was played by an African- American singer named Zelma George, who, in real life was a social worker. She was astounding. When Menotti got word of her performance, he invited her to play the role in New York,
and later at one of his Spoleto Festivals. When the performance ended, the audience went wild,cheering, shouting, and clapping, with a standing ovation that lasted a long time. Students in those days always packed the old auditorium, taking advantage of these free cultural events. On the way out, I ran into a rather snotty English professor, who was just amazed at the students' enthusiastic response, and wondering why they did so. I just stared at him. Of course it had been excellent, but students actually liking an opera?
The famed Juilliard Quartet came and the students packed the theater again. During those years, the radio networks NBC and CBS each had its own symphony orchestra, and presented regular classical music programming, so many people knew groups like this quartet, as well as "stars" of that genre. There was this kid who always sat in the front row. He may have been a facility child for all I know. During the Juilliard's performance, one of the violinists had a string break. When he discarded it and put on a new one, this kid jumped out of his seat, scrambled to the edge of the stage and grabbed it. It may show up on "Antiques Road Show" any day now.
Another favorite of mine was the poet Ogden Nash, well known for his wit and word play. I had been a fan in high school, and had a couple of his books. It was fun to hear him, in his dry, mid-Atlantic drawl read his funny, clever take on the catsup bottle and why his Cousin May fell through the parlor floor today.
One somewhat sad thing happened. Jose Iturbi was one of those musicians who was a classical pianist/radio and movie stars. He was in a lot of those really cheesy MGM  musicals with those shrill, reedy sopranos like Jane Powell and Kathryn Grayson. I guess he was too big for Kent State, but we got his sister Ampara, also a pianist. She looked like a female version of Jose -not a good look for a woman. Unfortunately, she got lost during Chopin's Fantasy Impromptu, noodled around until she found her way out, and finished it in good time, a musician's nightmare. Nobody laughed that I know of, especially the music majors.
Now the University Auditorium is called Cartwright Hall, and is one of many performance venues. There is no longer an artist/lecture series, but there are plenty of concerts,  plays and interesting guest speakers through various departments.
Many significant  performances linger for me when I am there.

Posted by Guenveur in Kent at 2:16 PM