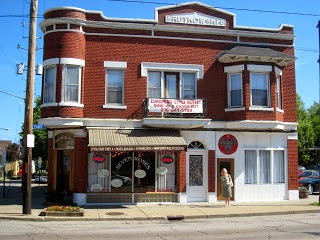 Fleet Sreet is the main thoroughfare of Slavic Village, which was a mainly Polish section of Cleveland. Not too far from the valley of steel mills just south of downtown, it was settled in the late 19 th and early 20 th century by immigrants from Central Europe, who flocked to this area  to work in the mills and factories that made Cleveland one of the largest, and most diverse cities in this region. Cleveland was a collection of ethnic villages, few of which remain, since white flight to the suburbs in the prosperous post-war years.
Slavic Village remains as a smaller version of its  slice of Europe in Northeastern Ohio. It's centerpiece is the magnificent St. Stanislaus Church. Most of these neighborhoods have, or had, beautiful churches, built by money from the working class immigrants to glorify the old religions of their homelands. Some are now empty and sad, but St. Stanislaus remains strong.
Slavic Village has suffered from being in the Rust Belt of dying steel mills, and the housing has fallen victim to the rash of predatory lending. The business district was affected by this, too, withe little grocery stores and bakeries unable to cope with the change in population.
However, there are still restaurants specializing in real, honest Polish cuisine, and not just pierogies. We have been to a couple of them, and scoped out a couple more which look promising. They are neighborhood centers, old, warm and friendly. The juke box leans toward music of the 40 s and 50s. The Red Chimney, the outside of which resembles a Swiss chalet, serves individual meals, while the Seven Roses has a luncheon buffet, with more food than I could ever eat. The proprietress, who looks like the cook on "Orange is the New Black," complete with the dyed red hair, and her friend were sitting in a corner, chatting in Polish. A young waitress, also Polish, directed us to the buffet. This is a very large place, set up for banquets and parties. They were in the process of getting a Christmas tree decorated  for the season of parties.
The food was delicious, and mainly spiced with dill. There were cabbage rolls, mashed potatoes, greens, latkes, and things I didn't recognize. The proprietress came over to ask how we liked it, and was pleased with our answer. She sent over some cookies-kolaki? She made money off us, because there was so much food we didn't 't even try to eat. I found out that the restaurant is a destination, with people coming in from the suburbs, especially those of Polish descent.
There's a resurgence in the Rust Belt. The mills are back. Young people are coming back to remake the cities in new ways. Downtown housing, walkable neighborhoods, high tech professionals, repurposed old buildings, specialty restaurants, brew pubs, artists and galleries, and creative types grabbing up cheap properties to make new neighborhoods - it's pretty exciting to see what's happening around here. Places like Slavic Village will benefit, and perhaps some of the other old ethnic neighborhoods will be revived.
I like having the benefits of living so close to a city, where we're only 45 minutes from the museums, theaters, concerts and discovering  these pockets of old Cleveland that have survived, complete with their delicious food. 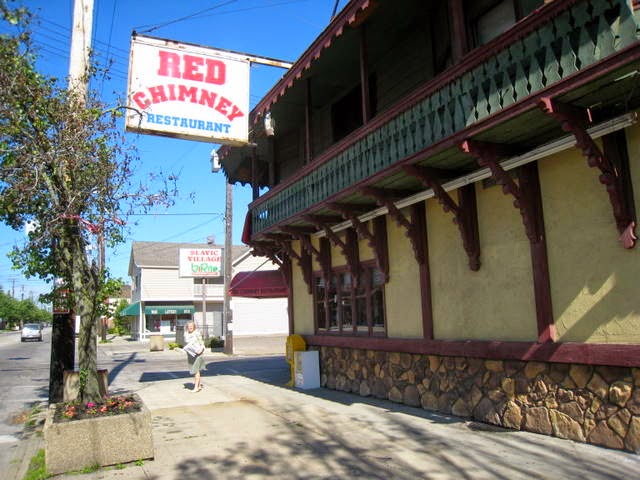 Posted by Guenveur in Kent at 9:30 PM