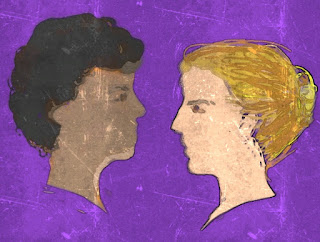 In the last several months, two old friends have died, friends who go back fifty years. I met one through the other. One I have not seen for many years, since she and her family left Kent many years ago. The other I have seen for at least two years, since I had to quit driving. Phone calls and letters have substituted for face to face tome.
France's diet his past winter, and I learned of her death through the local paper. Even though she had not lived in Kent for over forty years, she had grown up here, and I assume her family knew that there were still people here who would want to know. I had last talked with her about a year  ago, but had been out of touch since then.
Frances was the daughter of one of my favorite English professors, although I did not meet her until I moved back to Kent in the late 50s. She had married young, right out of college and had six children before she was thirty, which I found unusual in someone who was not Catholic. Her children were all bright and attractive, but older than mine. France's was a writer and editor after her family got older, intelligent and interesting. She would come back to Kent while her parents were still alive, and we would get together and talk and talk. She and her husband went through s divorce - not her choice- and she had some hilarious stories about getting back into the dating game. She finally remarried, a man she met while working on as an  editor, and it was a good marriage. Our communication was  sporadic, but always it was as if we had just met a couple of weeks ago. Our last conversation came after the death of her oldest daughter, Sarah, a beautiful, brilliant woman. I think that loss broke  her heart, and I had not heard from her since. My other friend, Pat, said that Frances told her she had given up after that loss, and I have no contact with the family and have no details of Frances's death.
Pat, the other lost friend, died two weeks ago of ultiple myeloma. She'd  been fighting it for four years. I had not seen her for most of that time, but kept in touch. I met her and Frances  at about the same time. We all were at the stage of having small children, and spent a lot of time together. Pat had three sons, roughly about the ages of mine. They lived in what was then "the country " although now you can see the university from their balcony. Pat was a remarkable woman, as is her husband, who is an artist. They decided to bring their boys up to know how to do things. With their father it was using tools and  learning how to make things. ( he was building their house when they were little.) With Pat, it was learning how to cook and sew and manage a household, not because she was a woman, but because they needed to know how to be competent human beings. When they were all in school, she began teaching kindergarten in their local school, which she did for over 30 some years. In the meantime, she began to devote her spare time to creating the most magical miniature houses. You can see her museum quality results  by clicking on "Pat's Amzing Miniatures on the list of friend's blogs on the right.
Both of these women were asignicant part of my young adults oh. They enriched that time for me and I am so glad  I knew them and will never forget them. One thing about getting to be my age is that you find yourself knowing more people who are gone than living people. Many others of my old friends are no more. That's the way it is., but they live in my memory.

Posted by Guenveur in Kent at 4:25 PM