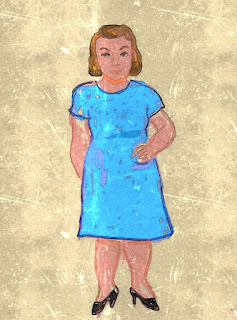 At the risk of being offensive, in  light of Caitlyn Jenner's recent transition, I do wonder why she found it necessary to spend so much money and pain on her appearance as a glamorous woman. She looks nothing like her former self. She haS been "sculpted" into a facsimile of feminine "beauty," as defined By current cultural standards, as exemplified by her former step- family, for instance.
I  don't know that much about transgender identity, only that it seems to be a very complex and internal sense  of gender confusion and selfhood. It can create much pain, anxiety and uncertainty in someone who experiences  it throughout childhood and adolescence. With more knowledge, more people being open and courageous about accepting their gender identity, perhaps that kind of suffering will be lessened.
What I am wondering about Is not the authenticity of this issue, but of the need to transition not as an ordinary woman, but as some kind of artificial movie star version of a woman, an ideal of the male imagination of how a woman should look, as in the case of Caitlyn Jenner. Many years ago, the early transgendered women like Christine Jorgenson and Renee Richrads were attractiveness but didn't look as if they had been manufactured into facsimiles of Vogue models  by teams of plastic surgeons. Even now, I am sure there are ordinary looking women who were once males without looking like Jenner. The thing is, they are not famous, they are not wealthy enough, or maybe they just want to be themselves as women without the need to look like something else, now that they are comfortable in their own skin.
Just sayin.'
Posted by Guenveur in Kent at 1:53 PM