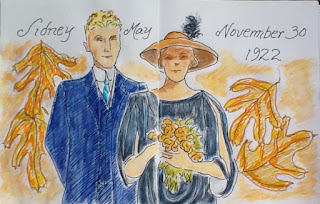 Good grief! I have completely skipped over the month of May. I'm not sure why that happened. I wasn't binge watching anything on my IPad. I had no out of town company, at least not until the end of the month. I wasn't sick. My online art class  ended somewhere around the middle of the month. Perhaps I had nothing to write about. That's never stopped me before, of course. Perhaps I am just lazy. Yeah, that's it.
The online drawing class did require a lot of physical and mental energy. I must say that I really enjoyed it. I was tempted to go for a third session, but the room where my drawing table is located is not comfortable in the summer, so I shall wait until Fall to do it again. There were, in this second session, some really terrific students, whose work was inspiring and exciting. There were two women from the U.K., one from England and one from Ireland, both of whom did some interesting drawings. It's always fun to work with Susan Shie, too.
My friend Susan B. came  up for a short visit. She had spent the month of January in Florence, and had done some  very fine photos of that beautiful area of Italy. On my first trip abroad she and I had spent a week in Florence. It was December, so the tourist traffic was minimal, and it was such a terrific place to be, a whole city as one big museum, the seat of the Renaissace. You can walk where the Medicis  and Dante walked, to say nothing of Giotto and Michelangelo. I envy her that month. She and a friend rented an apartment overlooking the Duomo. She said they had plenty of room, but my traveling days are over. I just can't do that kind of walking any more. I"m glad I have been able to go to all those magical places in Europe in the past, so I can't complain.
I am definitely not looking forward to the looming presidential brouhaha. The Republicans are desperately seeking ways to deny that President Obama has succeeded in improving things in the country. There was a fine op-Ed piece by Eugene Robinson the other day.  He covered all if the potential Republican candidates on their ideas of how to solve the ISIS crisis ( there's a catchy couplet for ya) and what each one has come up with is what Mr. Obama is already doing. The TV interviewers never do any follow-up questions after they ask for specifics  from people like Cruz or Santorum or others who make brash statements about how they would deal with some of the difficult challenges facing a president. They are never challenged. Those so-called " debates" are unsubstantive farces, not worth the time and money wasted on them. And, my God, I think they're starting this summer.
Well, since I missed May, I offer my last project for the drawing class, a picture of my parents' November, 1922 wedding. One of them is named May, and she is wearing a midnight blue velvet wedding gown.

Posted by Guenveur in Kent at 8:06 PM