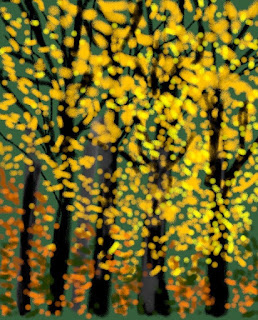 I am guilty of blog neglect. It's not that my life isn't exciting enough to write about, which is true, but that time flies so speedily by.  I am slow these days. It takes me a couple of hours just to read two newspapers every , a bit of a slog because  of crummy eyesight, even though I try to skip the Middle East mess and the latest shooting. I do read the Op-Ed page, including both liberal and conservative think pieces. Clears my lethargy right up. I marvel at the right wingers' complaints about my president, and what they think he should do about the mess his predecessor made of the world. Most of what they think he should do he is already doing, but apparently they don't read the news about that.
As for the current state of the Republican Party, it is my belief that the red-faced bloviator is out to destroy the GOP and is having a lot of fun with that. His gutless competitors need to  speak up and start trying to bring some sanity into play. I am not of their party, but if I were, I would be mad as hell. I don't have much faith in the average American voter anyway, but this time it's  ridiculous.
We had a lovely Thanksgiving, with the whole family together. The girls -uh- women from far away fixed great meals every evening, and everyone worked on the major feast. I even made the favorite company Jello, so- called because we only had it when company came. Other than that, my lily-white hands never  ventured into the kitchen except to eat.
Having everyone home is a little different these days. There's stil
l a plethora of talk, talk, talk, but then the devices come out. Must check the email, then FB, and next thing you know there is silence and an unearthly bluish glow on the faces. We're all guilty.
Polly's friend Chris was here, too, so we really had a full house. All the visitors enjoyed the new downtown and the coffee shops. The pop-corn shop was wisely avoided, thus saving us all from sugar shock. We had one dinner at the Pufferbelly, a warm and cozy place, especially at this time of year.
Then the visitors dispersed, leaving many leftovers, but an empty house. Polly will be back for
Christmas. Since Emily lives in the land that invented Christmas, she and her family stay put.
It was a fine Thanksgiving, the holiday now known for bargain shopping.

The above picture is how the woods looked about three weeks ago. It is quite nekkid now.

Posted by Guenveur in Kent at 7:32 PM