It's a Cold, Cruel World 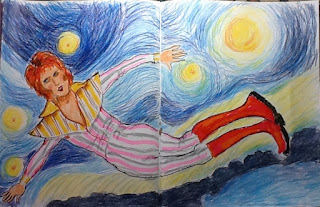 Well, not really, since I have a working furnace and warm clothing. That title was inspired by looking out the window, where all is black, white and mainly gray. We have gotten a little sun now and then to keep us from S.A.D. However , the unsanitary going on in the political arena no doubt has made many people sad, wondering what's happening to those voters being polled who persist in following a total nut job, recently endorsed by the clown princess of nut jobs. Perhaps there has actually been an alien invasion, kept silent by the billions of dollars owned by King Nut, who claims to have great powers (cue Twilight Zone theme).
I am distracting myself by taking the fabulous Susan Shie's online drawing class, which is a sort of free form " express yourself" class. We do have assignments each week and special event  projects, that may involve the State of the Union address (our impressions of) or the Golden Glibe Awards
(our impressions of) or MLK 's birthday (our impressions of). It's a lively and fun thing to do, especially in the drab days of winter in Northeast Ohio. The above illustration is my impression of the late David Bowie as Ziggy Stardust, who I figured would want to meet VanGogh, somewhere amongst the starry skies over Arles. Thus week's assignment is to draw an impression of our kitchen stove, my least favorite appliance. This may sound strange, but the idea is to challenge oneself, and the results in the class are always original and imaginative. Lots o' fun.
My movie going has been sparse, mostly by choice. Not much appeals to me. I have seen a few of the nominees, found them enjoyable, but not great. Two were clones of "All the President's Men," namely " The Big Short," and "Spotlight." The latter will probably get the award, even though it is full f white people, as were all the nominated films. Hmmmm.

Posted by Guenveur in Kent at 5:00 PM

I like your drawing very much. I saw the original starry night this past summer and it was almost as nice as yours! Wish you would post more of your pictures from the class.