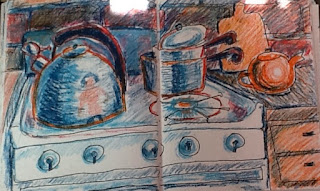 I mentioned that my next drawing for the online drawing class was to be of my stove. Susan likes to choose quirky subjects for this class which is part of the fun. Last Sunday morning we decided to watch CBS Sunday Morhing, which we don't usually do. It happened to feature a piece on an artist I was not familiar with. It was Ernst Ludwig Kirchner, and I loved his work. He was a contemporary of Gabrielle Muntet, the German Expressionist I discovered some years ago in Munich, whose work inspired me in doing my Amish paintings. I decided to use that for the stove drawing, using oil pastels. It went very fast and was most enjoyable. We have to use a huge (11x 14) sketchbook, double spread (22x44) and cover every inch. I'm used to working small, so I have found that a bit daunting, but this one was relatively easy.
Today I went to see '"Turandot," another opera with one good aria-"Nessum  dorma." Unfortunately, the tenor who sang it sucked. The production was lavish and gorgeous. Cecil B. DeMille would have been jealous. The production was designed years ago by Franco Zeferelli, who also did the over the top but beautiful "La Boheme." Less is more does not apply to some of these productions at the Met, although there was an interview today about the new production of h"Mamon Lescaut" coming up, which will be presented as a 1940s film noir, with a rather stark looking set. They are working hard to get new and younger audiences , rather than us geezers, who totter in to hear old favorites. Polly saw "Turandot" at the Met last week and saw quite a few younger folks there, so they are on the right track. Maybe they'll tackle "Tommy" some day.
Posted by Guenveur in Kent at 11:18 PM