Iowa. What Good Is It? 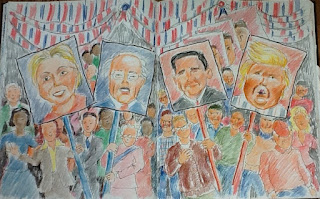 It is still early in the day. I do not know what portends. A couple of weeks ago, on "The Good Wife," they only did the Democrat side, and  Hilary came in first, and Chris Noth, the raftink husband, came in last, thus dashing his hopes for the presidency.
I am already sick of the whole thing, tired of the media fascination with the Big Jerk, and worried about the state of intelligence in this country.
This is the last drawing of the online drawing class and it was fun drawing all those red faced, angry white men promoting their guy, aiming to vote against their own self-interest. Since the "American Dream" seems to be mainly about getting rich, I guess they think some of his wealth will somehow rub off on them. Oy!
I included a Miss Universe on the Far Right side. She only wants World Peace.
Posted by Guenveur in Kent at 3:04 PM