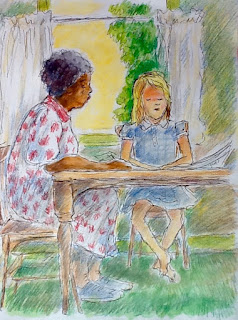 In our online drawing class, we were asked to do a piece in homage to the late Harper Lee. One reason I loved "To Kill a Mockingbird" is that it is so evocative of my own childhood, which was during the same period as that in the book. In this picture, I am 9 years old. It is 1936 and we are in Atlanta, Georgia. The other person is Emma, and she is in her 70s, and was born into slavery around the time of the Civil War This did not seem remarkable to me, because in the South in those days, that war was about two weeks ago.
I am reading Emma's favorite comic strip in the Atlanta Journal. The strip is about a young woman named Pam, whom Emma calls "Pom." I am reading to her because she has forgotten her glasses, which happens every day. When I asked my mother about  this, she said that Emma probably could not read, but that I was not to say anything to her about this, ever.
Emma came to work after my mother gave birth to her fifth child, who was born about 18 months after the fourth one. Emma did the washing and ironing, and once in a while, the cooking. She made fried bread, and cooked greens in salt pork, and insisted that I drink the "pot likker" a bit of folk wisdom in that that's where all the vitamins ended up. I was the skinniest shie'd she'd ever seen and needed fattening up.
The only clue I ever had about her history was that during the Halloween season she was frightened by people wearing masks, which she called "dough faces," and also by kids wearing sheets to play ghosts. She told my mother that it all reminded her of the night riders, those terrorists who rode into Black settlements, torching cabins and burning churches.
It wasn't until many years later, when I read "The Autobiography of Miss Jane Pittman," a fictional, but well-researched account of a woman born about the same time as Emma, who lived through  those awful times, and lived long enough to vote in her nineties. (It was made into a terrific TV movie with the magnificent Cicely Tyson.)  I immediately thought of Emma, and wondered if that gentle old lady had lived long enough to vote. I wondered if she had gone through some of the trials Miss Pittman had endured, especially as a child and young woman. Something had helped her survive into her seventies, still strong enough to go to work every day. I would never have thought to ask her about her life, which would have been rude, but I wish I knew more about her.
Posted by Guenveur in Kent at 10:47 PM

Oh, this is so sweet!