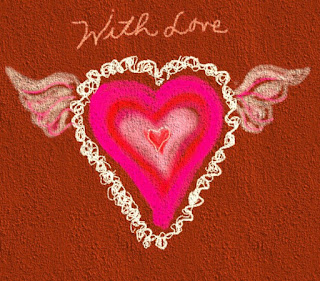 When my favorite radio station, WCLV, the best classical music venue, goes into its fund raising mode, I send in my contribution and then switch to WQXR until the money talk is  over. This usually lasts about a week. WQXR had previously asked listeners to send in their most romantic classical music choices. The top twelve were played yesterday in celebration of Valentine's Day.
It was a trip down memory lane to my adolescence and my obsession for the Romantic era  of music, and it's still beautiful to hear,  the old favorites, plus some I didn't discover until I was older.
My young choices, things I heard on the radio, which in those days had many classical music programs, and of which I bought those heavy 78 rpm albums  or singles were what I heard yesterday: Tchaikovsky's "Romeo and Juliet Overture," Debussy's "Clair de Lune," Beethoven's "Moonlight Sonata," liszt's "Liebenstraum," and Rachmaninov's Second Piano Concero. That last was also the soundtrack to one of the most romantic ( and saddest) movies ever made, "Brief Encouner."
A little later came the Liebestod from "Tristan and Isolde," the love/ death aria of their tragic love story. Somehow love and death were very appealing concepts to me.
Another on the list, which came into my life later, was that gorgeous second movement of Mozart's Piano Cocerto 21, which  became known for its use in the movie "Elvira Madigan," a story of two beautiful young lovers who end up committing suicide....more love/death themed associations. By the time I saw that movie I was pretty much over with that obsession, but I do love that piece.
Another one on the list that I discovered about twenty years ago was the adagio movement from Mahler's 5th Symphony, which is probably the most gorgeous piece of music ever written. It was used as the soundtrack to "Death in Venice," so there you are again.
As soon as I heard this program yesterday, I flashed back to that skinny adolescent sitting by the record pkayer, which one had to do in those says if you didn't have a record changer, so you could flip the record or  put the next one on as quickly as you could in order not to break the mood. TodAy, you have access to almost every piece of music ever composed with a tap of a finger on a device you can carry with you. Today's young people are probably a lot less inclined toward the old fashioned romantic fantasies of my era. I think I would be labeled "emo" today. Whatever. It was a rich phase to me