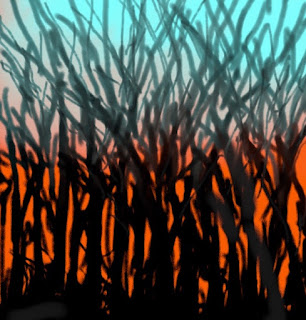 I have never cared much for the  actual holiday of January 1. It might stem from the childhood feeling of Christmas being over and the knowledge that school loomed ahead for six months. Oh, there were the fun years of New Year's Eve parties, dressing up in glitter and convivial and alcohol fueled hilarity, but the thought of that just makes me tired thinking of it.
This year  there was our usual subdued day, with the bonus of discovering that Truman Capote's beautiful and evocative "A Christmas Memory" is on YouTube. We were able to watch it on TV, thanks to Polly's gift of Roku. (If we could have stayed awake afterwards, one of those TV movie channels was running a marathon of my favorite Mel Brooks flicks, "Young Frankenstein," the one with Cloris Leachman's immortal line, " He vas my poyfrent!" My eyes decided to close and I  missed it.)
The Truman Capote piece is right out of my childhood. My first Christmas in the South was spent in my grandmother's home in Montgomery, Alabams, crammed in with my Aunt Marie, her husband and her two children. At that time our family consisted of my parents, my brother and sister and me. I don't know how we all fitted into the house. My cousin, Little Amalia, was not at all happy to have to share our grandmother with usutpers from the North. She had recently acquired a playhouse in the back yard and let us know we were not welcome to enter it.
I didn't know it at the time ( I was 4 years old)" but the Depression had started to take hold, which was why we were there. My father's job in Atlanta would not start for a few months. I remember that we had fried squirrel for Christmas dinner. It was not a dreary time for the children, actually, but I can imagine that there was a lot of stress for the adults. My grandmother had a good job. There was a maid and a manservant who drove my uncle to his job, but that was just Southern custom, regardless of the economic situation.
When we moved to Atlanta, things were better. At Christmas, my father and brother would go out to the piney woods to get a tree. I remember picking pecans up on the ground and the smell of them. Mother would make fruit cakes right after Thanksgiving, and would pour a little whiskey over them in the weeks before Christmas. She did not make cookies, but rather all kinds of candies: dates in fondant, sea foam, divinity, penuche and chocolate fudge.
The Capote story has echoes of all this, including the Southern landscape itself, which is why I love it so. It was originally on ABC as one of their specials, and was so well-received that it was repeated a
week later. Of course I watched it again.
In all, our Christmas holiday was very pleasant, with Polly home from Provincetown, cooking us wonderful meals, chatting with Emily on FaceTime, several trips to Cleveland to Playhouse Square, Trinity Cathedral for the Boar's Head Festival and to the great Cleveland Museum of Art.
I think I am ready to cope with winter.
The picture above is of the woods a few weeks ago, early in the morning, bare enough to see the sunrise.
Posted by Guenveur in Kent at 7:29 PM