Dispatch from the Right 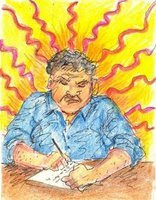 Got another capital letter wing-nut email letting me know that we have let George Bush down. He was right to attack Iraq, but we have not helped. WE ARE NOT MAKING SACRIFICES THE WAY THE PEOPLE DID DURING WWll. We are just going to the mall. Gee, I had no idea we were expected to make any sacrifices for the war effort. I thought we were supposed to shop and not worry our little heads while George & Company made the world safe for us. I wish he'd said something. Mea culpa.
I had earlier received a warning from the same person (who forwards me this stuff and actually believes it) that I was going to lose my retirement money because Nancy Pelosi wants to give our tax money to ILLEGAL IMMIGRANTS. I guess those illegal immigrants are behind the mess on Wall Street. Again, I had no idea that so many of them were in the mortgage business. Had I but known I would have kept my money under my mattress.
Posted by Guenveur in Kent at 5:56 PM

I'm getting my pencil out so I can start drawing the nylon seam down the back of my leg while I'm posting here. I just finished reading the letter that I received from the IRS telling me that I may be getting $600 in late Spring. I know that we are supposed to spend that money in order to help "stimulate" the economy (as if buying a six-pack and a loaf of bread will help....), but maybe I should send it to the Defense Department as my sacrifice instead. What to do, what to do?