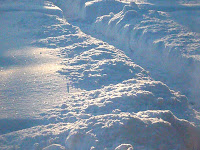 The snow started Friday afternoon and continued until last night (Saturday) and today the sun is making everything sparkle. People are digging their cars and sidewalks out. John spent over an hour yesterday shoveling out the driveway as the snow kept coming down. Things starting closing down Friday: concerts were cancelled, theaters were closing and by yesterday almost nothing was open. Even the malls were closed, which is shocking in this area of mall sprawl. Must have been a terrible thing for the shoppers who swarm them every weekend.
The snow plows didn't arrive in our neighborhood until around 9 o'clock. Even this morning when I went out to breakfast the streets were still snow covered, since the salt hasn't been applied yet. I'm sure the kids are unhappy that this didn't happen on a school day.
Since the radio and TV stations which I frequent are on their endless fund begging, I mostly read and listened to the opera on my computer. It was "Lucia Di Lammermoor, an archetypal melodrama ending in insanity and death. During one of the intermissions there was an interview with a musician who plays the glass armonica (sic). It seems that the Lucia, Natalie Dessay, wanted to sing her mad scene aria accompanied by the glass armonica rather than the flute. Apparently Donizetti had originally planned it that way but it has traditionally been done by the flute. The musician talked about the instrument, invented by Ben Franklin, and gave a web site where one can actually play a simulated version of same:
http//www.fi.edu/franklin/musician/virtualarmonica.html
It's quite noisy, since the notes sustain forever. When I listened to the mad scene, it did add to the craziness of poor betrayed Lucia. This is the one of the few Metropolitan Operas I actually have seen, when they used to come to Cleveland. Roberta Peters, one of the few sopranos of that time who weighed less than a Mack truck was a lovely and brilliant Lucia. I went with my student roomer whose cousin was the lead ballerina in the wedding scene. As I recall she did a Scottish sword dance just before the appearance of the bloodstained Lucia, who had offed her bridegroom with a knife she just happened to take with her to the bridal chamber. See, she was forced into marrying this guy because her family needed his money but she loved Edgardo, who after learning of her death (She just dies from shame, I guess) stabs himself in a graveyard while singing like a bastard as usual. Don't blame the Italians this time; it's based on a story by Sir Walter Scott.
Posted by Guenveur in Kent at 2:14 PM