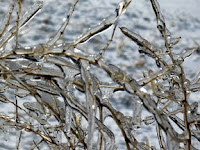 As I write this, we are in the beginning of another big snow; it's actually coming down sideways. I missed my exercise program this morning and a spelling group (see below) meeting this afternoon as well as my volunteer shift at the historical society. It's supposed to get worse tonight and tomorrow, with up to a foot of snow. By late yesterday the old snow had finally disappeared and we could see the bare ground for the first time in a long time. We had an ice storm last Tuesday, election day. I managed to get to the polls before everything froze up too much. I decided to vote for Hillary, mainly because I was rather annoyed at the media for writing her off. Wotthell, as Mehitabel used to say. However, everything is still up in the air and we shall continue to be subjected to the endless bloviating from all sides. I think we definitely need a moratorium on campaigning until the week before election day in November. Enough, already.

The ice storm was not so bad in Kent, but some of the neighboring towns had power outages that lasted for several days. The roads were cleared in no time. The next day, the sun came out and it was beautiful, with sparkling trees and bushes. The street signs had little icicles dangling from the bottom. Then yesterday when I opened the front door, there was this sound as if it were raining. The sky was a cloudless blue. I realized that it was the ice melting bit by bit from the trees. There was still a little snow on the ground and it was full of little dimples from the falling ice pieces. It was a little bit of magic. 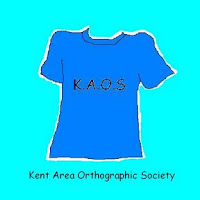 Center for Healthy Aging", which is a great bit of niche marketing. She has been emceeing the local Senior Spelling Bee, which is sponsored by one of the area mental health centers. Her office was one of a group of businesses having an open house a couple of years ago. They are all in a section of town which has gone through a revival of sorts, with old buildings restored and recycled, so to speak. Being a building nut, I went on the tour. Each place had a drawing for a gift basket and I happened to win the one for her office. It included a membership in a new senior spelling group she was starting. We meet once a month and each time we bring in words we have found or heard and discuss them and all. We have one man, a retired botany professor who is ninety or so but it's mostly old women, retired teachers and librarians. They are very smart and funny and for some reason are all Democrats. (Can you spell "Obama"? "Hillary"?)The local spelling bee has been going on for several years and a couple of the women in the group have done it and come close to winning. The winner gets to go to Wyoming (Wyoming??!!) for the national senior spelling bee sponsored by the AARP. The winner of last year's national bee (she's from a nearby town)came to our meeting last fall and she was just barely sixty! I was sorry to miss today's meeting. I had some great words to share: gasconade, catawampus,peripeteia, ochlocracy,quinoa and psittacosis. Look 'm up.
Posted by Guenveur in Kent at 1:34 PM