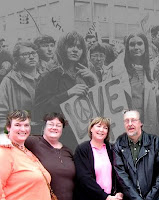 Sunday I drove up to Ashtabula to attend a graduation party for the daughter of one of the former volunteers at Townhall II, the local crisis intervention service here in Portage County. I became a part of that organization 37 years ago as a volunteer, became the training director and then ran the community education/prevention program until I retired 16 years ago. Renee, the mother of the party honoree, has been living in North Carolina for 14 years, and it was so good to see her. She was one of hundreds of Kent State students and community members who had volunteered at the agency over the years. Another "old" volunteer, Elaine, was also at the party, so there was a lot of reminiscing done. One thing we all agreed on was that our time there, especially back in the 70s, was spent with some of the best people we had ever known.

The crisis line began on campus in the winter of '71, instigated by the counseling center as a response to the many students who had returned to Kent State in the fall of '70 after being traumatized by the shooting of students the previous May. The center was seeing a lot of students who just needed to talk about what had happened and how it had affected them. The psychologists had already thought of training paraprofessionals to deal with the mostly short term effects of crisis and decided the time was ripe to set up a training program and began recruiting volunteers. Within 2 years, the service moved off campus and became part of the county mental health system as a 24 hour crisis intervention service.
I volunteered in the fall of '71 and found myself in a group of 25 or so trainees, almost all of whom were students, with the exception of another community member, Nancy. She was a secretary and the wife of an older student, and I was pretty much a housewife and a member of the PTA and the League of Women Voters. The rest of the people looked like John and Yoko, with the beads and the peace signs and the hair and the beards. Four letter words I had never heard spoken aloud flew around, used as nouns, verbs and adjectives in most creative ways. The first party I went to with the group announced its location by the scent of pot wafting from an apartment. I didn't stay long, fearing the possibility of a headline featuring a local matron caught in a marijuana bust. It took some time to adjust, but we seemed to all fit together quite well.
As I got to know these kids, I realized that they were some of the brightest, funniest, kindest, most humanitarian and generous folks I had ever known. They were probably about the last generation of college students before technology took over person to person communication. They were pre-internet, pre-Ipod, pre-video game, and pre-cell phone people. It was also when the cost of attending a state univesity was within reason, so that these kids had the time to volunteer several hours a week. They also had a social conscience. They read books, they liked films, they played games, they made music. They knew how to listen, of course, since that's what we were trained to do, but you could also have a real conversation with them, using real words. Of course, it wasn't just the students who were endowed with these qualities. More community members joined the group: we had a bunch of local ministers, a priest, more housewives, a college instructor or two.
I have kept in touch with a number of these great people over the years. Some of them stayed in the area: Dave, Annie, Bill, George, Kat, Bev, another Dave. Craig, Rich and another Renee live in Columbus but come up once in a while. Judi and Toni both ended up in Atlanta, as did Ken. Nancy, after getting her master's degree in theology, is in Philadelphia making quilts. Sue retired from being a corporate lawyer in Chicago and returned to Cleveland to do pro-bono legal work. Jackie travels around the world with her music. Elaine quit her job as a newspaper and radio restaurant reviewer and has gone into online marketing. There were a number of marriages: Ted and Saunis, JBell and Ed, Elaine and Brad, Joyce and Dan. Quite a number of those hippie kids became lawyers, doctors (one also an author), nurses, school teachers, college professors, librarians, social workers, psychologists, business men and women, writers, editors, musicians, and journalists. Some are gone from us: Carol, BJ (who insisted on being called Zachery) and Joyce.
The "kids" are now in their late fifties, early sixties. They're older now than I was when I met them. Some are even grandparents. Whenever I run into one of them, they always say. "Those were some of the best times of my life." They tell me how the skills they learned have helped them in their careers. It was a real community of like-minded people who got as much as they gave from the experience. As Renee said in Ashtabula the other day, "These are people I keep in my heart."
(The above photo does not include any actual people I know. It's a Photo-shopped combination I put together from the web.)
Posted by Guenveur in Kent at 7:59 PM